Lowballer bargains with 64-year-old cabby over $7.60 fare because 'I'm old and not much money' 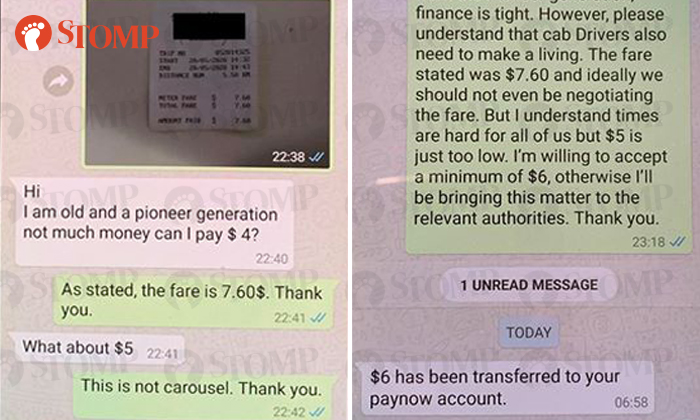 The act of bargaining and lowballing is common on e-commerce sites such as Carousell, but not in Singapore's well-regulated taxi industry where trips are metered.

However, that is exactly what one passenger ('X') and his father ('Z') tried to do with Stomper L's father, a 64-year-old taxi driver.

L told Stomp: "Passenger X, who is aged around late 20s, didn’t make known that he did not have any money before boarding the cab.

"X later told the taxi driver that he had no wallet on hand and had to contact his dad, Z, to settle the payment, but only upon reaching the destination as X didn't have a phone with him.

"After communicating with Z via my dad’s mobile, Z agreed to PayNow the money. However, my dad doesn’t have PayNow so Z said to call him back to settle the payment later as he was busy at that point.

"No photos of Passenger X were taken out of respect but X’s name and Z’s number were recorded for reference."

According to the Stomper, her father did not receive any further calls or messages after the initial conversation. Therefore, they decided to contact Z via WhatsApp.

L said: "Instead of paying $7.60 as mentioned via the phone call, lowballing was Z's thing."

In screenshots that L shared with Stomp, her father can be seen sending Z a receipt for the taxi trip and asking Z to transfer the payment of $7.60. 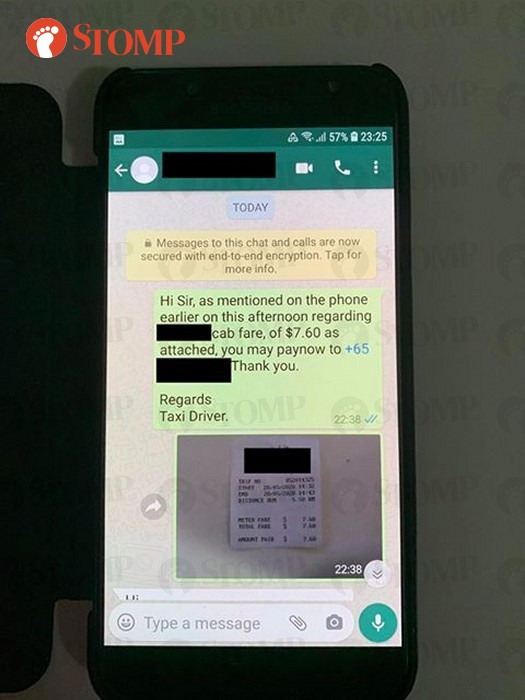 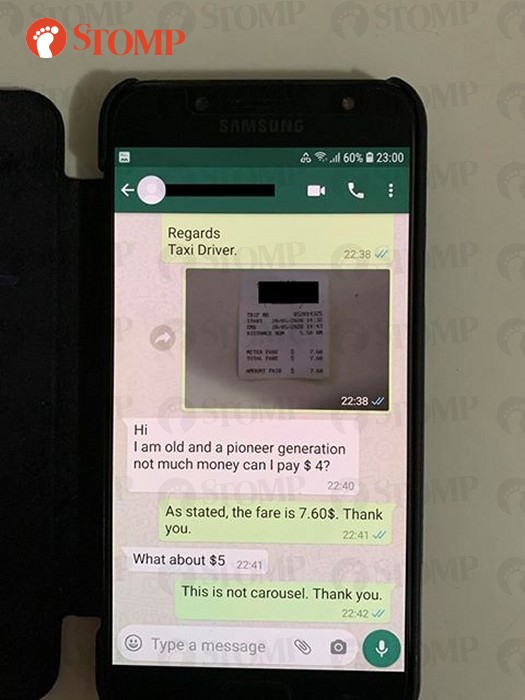 However, Z replied that he was "old", from the "pioneer generation" and did not have much money.

He asked if he could pay $4 instead.

The cabby replied, "This is not Carousell." 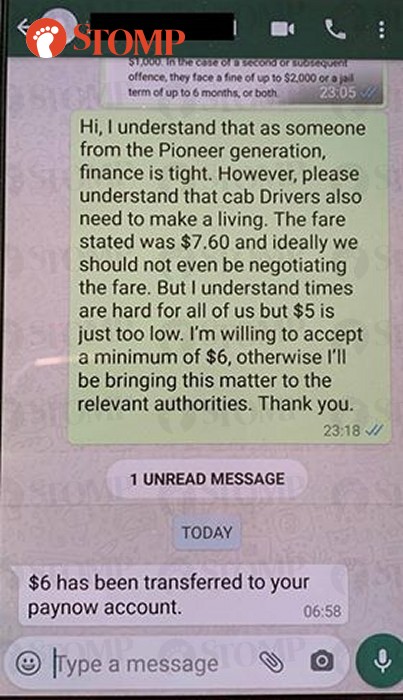 L's father told Z that he understood how finances might be tight but taxi drivers had to make a living too, adding, "Ideally we should not even be negotiating the fare."

Nevertheless, the cabby compromised and said he was "willing to accept a minimum of $6".

L, who hopes to raise awareness about what her father went through amidst Singapore's circuit breaker period, said: "We understand that it’s a crucial period for everyone and finance is tight, but drivers are trying to make a living too.

"It’s not about the amount, to be frank. It's about one’s principle and integrity.

"Shouldn't the passenger have the courtesy to inform the driver or ask if there are other available payment methods before boarding the car?

"As a Singaporean, I believe we should be having more solidarity in such difficult times like this. However, it is with great dismay to know what my dad experienced."

View all the screenshots in the gallery.

Related Stories
Another cabby shares story of how fare evader 'disappeared for good' in broad daylight
Cabby who waited 30 min for fare evader: 'This is what I get for working so hard to support my family'
ComfortDelGro terminates cabby who recorded and shamed drunk passenger who failed to pay taxi fare
More About:
text
funny
fail
evade fare
taxi
cabby