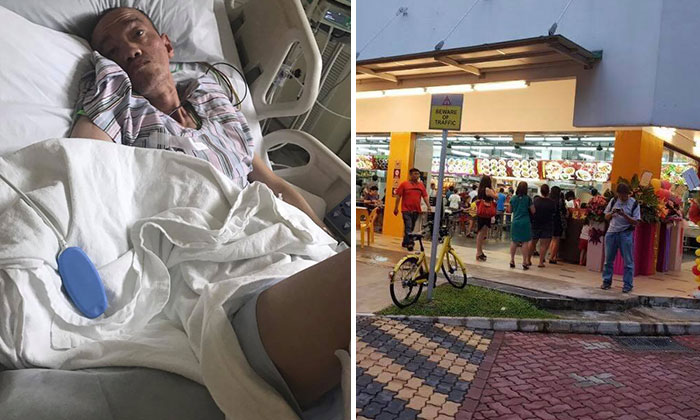 The family of a low IQ man is looking for witnesses to an alleged case of assault, which left the victim with permanent brain damage.

On the day of the incident, Kelly’s grandmother received a call from a coffee shop helper, informing her that Ah Peng was found lying motionless on the ground.

She immediately went down to the coffee shop and found her son sitting at a corner against a wall, and he looked unwell.

Kelly revealed that Jan 24 was also the first day of grand opening for the coffee shop under a new owner.

As such, there were many people in the vicinity.

Kelly’s grandmother started asking around to check what had happened but did not get any leads.

The owner then approached Kelly’s grandmother and allegedly demanded that she send her son to the Institute of Mental Health (IMH) as he had been ‘annoying him every day’, trying to land a job at the coffee shop.

The two started arguing before Kelly’s grandmother took her son home to rest at the advice from one of the coffee shop helper who personally knew her.

Kelly insists that her uncle is harmless and popular among residents in the neighbourhood.

“My uncle also worked (for) a couple of months with the previous coffee shop owner at one of the stores and always hung around.

Everyone knows he is harmless and in fact, very popular among the uncles and aunties.“

Even after resting at home, Ah Peng's condition worsened.

He started to vomit blood, while blood also trickled down his nose.

At about 6pm, Kelly’s grandmother brought him to a clinic, and the doctor told her that his condition was serious and he was to be warded at Khoo Teck Puat Hospital.

At the hospital, doctors diagnosed that Ah Peng had received a huge impact at the back of his head.

Ah Peng was admitted to the intensive care unit (ICU).

The family did not lodge a police report at the time as they thought that he had fallen backwards and hit his head on the ground.

“We didn’t even think that someone could hurt a vulnerable person like him. For the past three years at the coffee shop, he always hung out there every day.”

The family received three phone calls from neighbours and even a shipowner nearby that they heard rumours that Kelly’s uncle had been assaulted.

An employee at the coffee shop also approached the family, saying that he knew a few people who had been present at the scene during the incident but were afraid to speak out.

The employee told the family that Ah Peng had been attacked, causing him to fall backwards.

To emphasise the severity of the situation, Kelly spoke about her uncle’s condition:

“My Uncle who is mentally slow since the age of 9 (with Low IQ but fully harmless) was admitted at Khoo Teck Phuat Hospital into the intensive care unit (ICU). He suffered a permanent brain damage, with his skull cracked, and internal brain bleeding.

“The doctor said that it was a huge impact on the back of his brain that caused this. Even when he is discharged in the future, his life will be permanently changed.

“Be it mobility, lifestyle and the ability to speak, (all of these) would be affected. In the event that his brain injury worsens, which is possible, a surgery would be required.  There is a 50 per cent chance of survival (but still living differently from then on) or being a vegetable for the rest of his life.”

Kelly stressed that no matter the outcome, her uncle would require help with daily chores, such as eating, moving around, bathing, and even going to the toilet.

The news has already placed tremendous stress on Kelly’s grandmother, who is currently 78-years-old.

“Seeing her upset, not being able to eat or sleep, feeling giddy and losing her balance while walking sometimes, breaks my heart.

“Frankly, I hate to admit this but I am feeling so weak, upset and down now. I can't imagine how much worse my grandmother is feeling that (now that) her son is in this state. The after-hospitalisation life is not going to be easy either.”

“No one deserves this. A low IQ person’s life is still a life and he does not deserve this at all. No one has any right to treat someone vulnerable like this.

“Nothing and nobody that caused this impact can undo this damage to him and my family, but we hope to at least learn the truth as to what really happened.  We hope that people who are there who seen anything could step up as it really means a lot to us.”