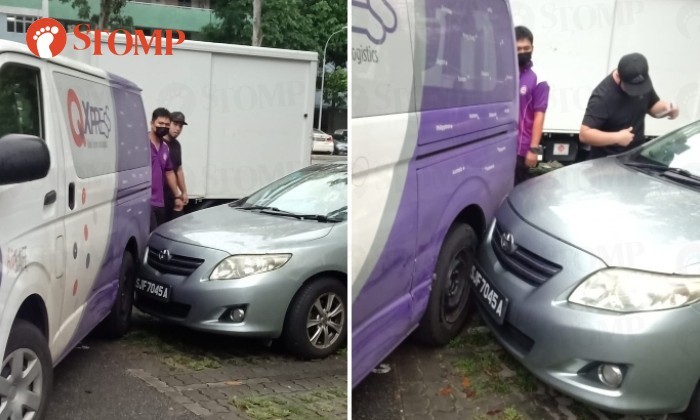 A Qxpress van knocked into a car while driving out of a lot at the carpark near Block 177 Boon Lay Drive on Thursday (Dec 31).

Stomper Awie said that he was heading home on his bicycle at around 3pm when he suddenly heard a loud bang.

He turned around and was shocked to see that a Qxpress van had bumped into the front of a Toyota car.

"The driver made a sharp left turn while trying to get out of the lot, hit the car and just got stuck there. As soon as I heard the loud cracking and banging sound I immediately stopped my bike and turned to see what happened," Awie said.

"After that, I continued riding a few meters ahead to park my bike. I got off my bike and quickly approached the accident scene.

"The van driver saw me and asked if I knew the owner of the car. I said that I didn't."

Awie added that he noticed that there were two men wearing Qxpress shirts and another man in black who seems to be their boss.

According to Awie, the van driver was one of the men wearing the Qxpress shirt.

"The man in the black shirt was taking pictures of the damage and writing a note on a piece of paper for the car driver," he said.

"After a while, the van driver tried to reverse to get out of the spot. There was nothing much so I went back home.

"About 15 minutes later from my kitchen window, which is facing the carpark, I saw another guy, who I believe is the car driver, talking to the guy in black. I guess they just handled this by themselves and didn't call the police.

"I actually think that the Qxpress employees are very responsible for waiting for the car driver to return so they can settle the matter. However, I am also disappointed that these kinds of accidents are very common.

"How did the van driver not see the car parked beside him? Maybe he was just too careless and was in a hurry to get out of the lot."