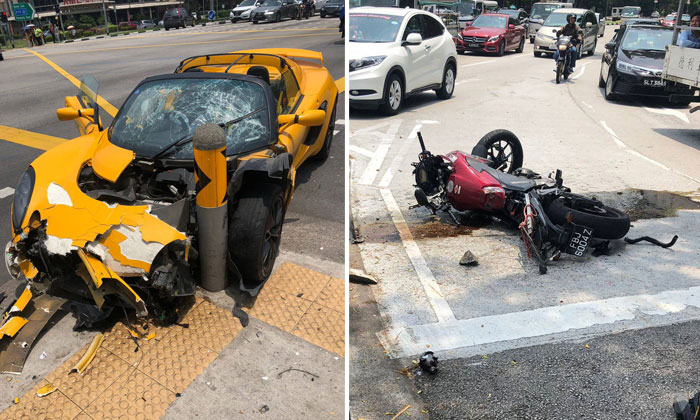 Three people were taken to hospital after an accident involving a Lotus car and a motorcycle at the junction of Eunos Link and Kaki Bukit Avenue 1 on Thursday (Sep 6).

Photos of the accident were posted online by a Facebook user.

In the photos, the front of the Lotus is crushed and wrapped around a bollard. Its windscreen is shattered from separate points of impact as well.

The motorcycle is seen lying on the road and debris is scattered around it.

In a video posted by ROADS.sg, two women can be seen sitting on the road near a pedestrian crossing as passers-by crowd around them.

Stomp understands the 50-year-old male driver of the Lotus was driving along Eunos Link when he collided with a 51-year-old female motorcyclist who was making a right turn from the opposite direction.

In response to a Stomp media query, the police said that they were alerted to the accident at 12.30pm.

The driver, the motorcyclist and her 43-year-old female pillion rider were conscious when taken to Changi General Hospital.