Lorry in flames along Jalan Eunos near PIE 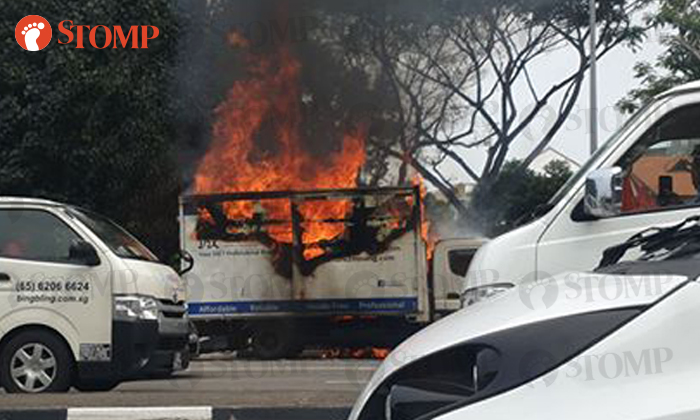 A lorry caught fire along Jalan Eunos, near the Pan-Island Expressway (PIE) towards Still Road, on Thursday afternoon (Jan 16).

The Singapore Civil Defence Force (SCDF) told Stomp that it responded to the vehicle fire at around 2.30pm and extinguished the blaze using one water jet.

She told Stomp: "I was about 100m away and it was a really big fire.

"When my car was stopped on the opposite side of the road due to the traffic lights, I could hear a small explosion coming from the lorry."

Stomper Anon also submitted a video of the scene.

The cause of the fire is under investigations.

Related Stories
Motorcycle bursts into flames at Jurong West carpark: 'There were two explosions'
Mazda driver gets out of car in time before it's engulfed in flames on TPE
Taxi catches fire at Sin Ming Avenue
More About:
car on fire
fire