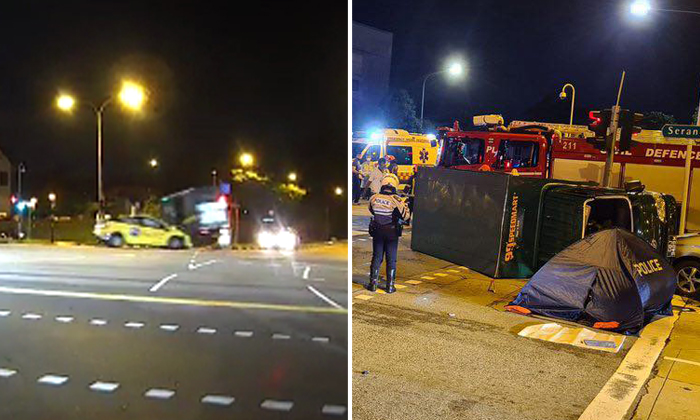 A video of a fatal accident -- involving a lorry, a taxi and a car -- that left one dead and three injured on Tuesday night (Apr 21) has emerged online.

Police earlier told Stomp that they were alerted to the accident at the junction of Phillips Avenue, Yio Chu Kang Road and Serangoon North Avenue 1 at 9.07pm.

The 58-year-old male lorry driver was found lying motionless and subsequently pronounced dead by a paramedic at the scene.

Several Stompers have alerted Stomp to a video that shows the fatal crash.

In the video, a 99 Speedmart lorry and a yellow ComfortDelGro taxi can be seen colliding at the traffic junction.

According to Shin Min Daily News, a witness said he was on his way home when he saw Singapore Civil Defence Force (SCDF) officers trying to lift the overturned lorry.

He said: "The lorry driver was trapped in his seat. The female passenger had been flung out of the lorry but fortunately, only suffered abrasions."

Ms Tammy Tan, group chief corporate communications officer for ComfortDelGro, told Stomp: "At the time of the accident, our taxi was travelling straight with the traffic light in his favour when the lorry came at the perpendicular and collided into it.

"We are saddened to learn of the demise of the lorry driver."

Ms Tan said ComfortDelGro is in touch with its cabby and the passenger who was on board the taxi at the time of the accident, adding: "We will assist them as best we can. We will also assist the police in their investigations."