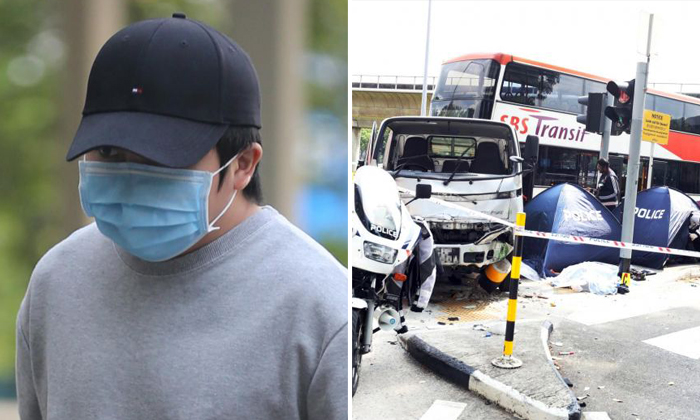 A lorry driver involved in an accident that killed three pedestrians near Yio Chu Kang MRT station last year pleaded guilty on Monday (Oct 14) to driving the vehicle without a Class 3 licence and insurance.

Singapore permanent resident Xu Kai Xiang, 27, was fined $1,400 and banned from driving for a year for the two charges.

Although he initially faced a third charge of causing the deaths of the pedestrians by driving dangerously on April 23 last year, Xu was granted a discharge not amounting to an acquittal pending the outcome of a coroner's inquiry into the deaths.

This means Xu can still be prosecuted for the offence later, depending on the evidence that emerges.

At the time of the accident, Xu was working as a safety supervisor for his father's construction company Chang Fu Pte Ltd, and was driving the company lorry to collect a parcel.

At around 9.30am, Xu was driving along Ang Mo Kio Avenue 6 towards Marymount Road when the vehicle ploughed into the three pedestrians - Mr Chua Cheng Thong, 86; his daughter Gina Chua Aye Wah, 58; and a family friend, Mr Yap Soon Huat, 63.

All three were pronounced dead at the scene by paramedics.

Xu, who was injured in the accident, had a Class 3A driving licence but not a Class 3 licence which is required to drive the lorry.

He had previously applied for and obtained a Class 3 Provisional Driving Licence, but chose instead to take his practical driving test in automatic transmission vehicles.

This meant he could get only the Class 3A driving licence, which he obtained on Aug 21, 2017.

However, Xu did not tell his father that he had only a Class 3A licence. Believing that his son possessed a Class 3 licence, the elder Mr Xu allowed him to drive his personal car and the company lorry.