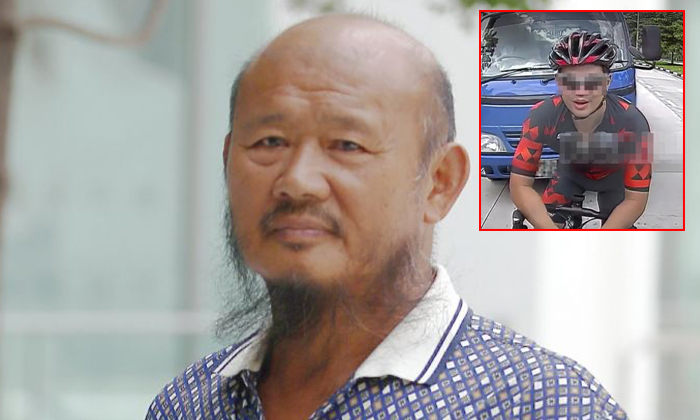 A lorry driver, who was seen in a viral video having an altercation with a cyclist, was sentenced to seven weeks' jail and fined $500 on Tuesday (Jan 14).

His lawyer, Mr Chia Boon Teck, told the court that his client, a Singaporean, intended to appeal.

Teo had earlier been convicted of causing hurt to cyclist Eric Cheung Hoyu as well as for failing to report an accident to the police within 24 hours.

The video of the incident, which occurred at the junction of Pasir Ris Drive 3 and Pasir Ris Rise just before noon on Dec 22, 2018, garnered more than three million views online.

On Tuesday, the court heard that Teo had previous convictions for voluntarily causing hurt in 1988 and 2012, and was convicted for affray in 1999. He was also convicted for an obscene act in 1993 and insulting the modesty of a woman in 2007.

He also had multiple traffic offences involving careless driving, speeding and beating a red light between 1999 and 2015.

Deputy Public Prosecutor Gabriel Choong called for the court to sentence Teo to 10 weeks' jail and a fine of $500. The DPP also called for him to be disqualified from driving for three years. The defence pleaded with the court to impose a fine for both of Teo's charges.

In remarks during sentencing, District Judge Chay Yuen Fatt said he was unable to agree with the defence for a fine on the more serious charge of causing hurt by rash driving.

He added that the sentence called by the prosecution also did not give "sufficient consideration to the deliberate actions of the cyclist... in breaking the lorry side mirror in the incident."

But the judge also said that the reaction of the accused thereafter was "disproportionate".

In the video, Mr Cheung is seen hitting the left side mirror of Teo's lorry.

The lorry then suddenly swerved to the left towards Mr Cheung, who fell off his bicycle and onto the grass verge on the side of the road.

Both Mr Cheung and Teo were later arrested within three days of the accident.

Mr Cheung pleaded guilty to committing mischief and causing obstruction by riding his bicycle in the middle of the lane instead of the leftmost side, and was fined $2,800 on April 12 last year.

Teo, who contested the two charges, was found guilty last month by Judge Chay who found the lorry driver had "deliberately swerved" his vehicle into the cyclist.

The verdict came after a four-day trial, which saw several parties involved in the accident taking the stand, including Teo and Mr Cheung.

During the trial, Teo testified that he was attempting to overtake two cyclists - one of whom was Mr Cheung - when he heard the sound of "something breaking".

Thinking that he had hit a taxi on his right, Teo said he then reacted in the moment by swerving to his left, in the direction of Mr Cheung, a British national.

Teo had also said that he was not unhappy that his side mirror had been broken as "it only costs $15".

This was disputed by the second cyclist in the accident, Mr Nigel Harper, who told the court that Teo appeared upset and quite angry at Mr Cheung, and was pointing at the broken mirror repeatedly.