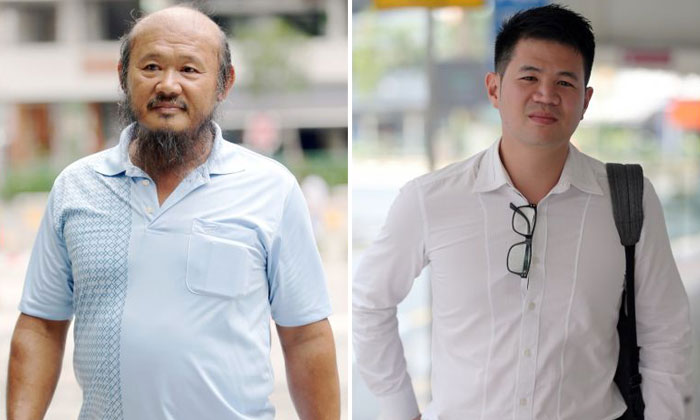 A lorry driver, who was sentenced to jail earlier this year over a collision with a cyclist, had his appeal against his conviction and sentence dismissed before the High Court on Monday (July 20).

Teo Seng Tiong, 59, had been earlier convicted in the State Courts of causing hurt to the cyclist, Mr Eric Cheung Hoyu, as well as for failing to report the accident to the police within 24 hours.

He had then been sentenced to seven weeks' jail, fined $500 and disqualified from driving for two years.

In the video, Mr Cheung is seen cycling in the middle of the left lane, in front of the lorry Teo is driving.

While the cyclist was moving to the left side of the lane, he struck at the left side mirror of the lorry, breaking off parts of it.

The lorry then suddenly swerved left towards the cyclist, knocking him off his bicycle and into the grass next to the road.

Both Mr Cheung and Teo were arrested within three days of the accident. Mr Cheung pleaded guilty to committing mischief and causing obstruction by riding his bicycle in the middle of the lane instead of the leftmost side, and was fined $2,800 in April last year.

Teo went to trial over the two charges he was facing but was subsequently found by the trial judge to have deliberately swerved his lorry into the cyclist.

On Monday, Teo's lawyer, Mr Tan Hee Joek, argued that a collision between the lorry and Mr Cheung's bicycle was not proven beyond reasonable doubt during the trial.

Deputy Public Prosecutor Gabriel Choong disagreed. Playing video footage of the incident in court, the DPP said that the video clearly showed the collision between Teo's lorry and the cyclist.

Mr Tan also submitted that his client had swerved to the left to avoid a taxi that was behind the lorry.

Teo had heard a "long horn" from behind him and later thought that the sound of his lorry's side mirror breaking was that of the taxi colliding with his vehicle, said Mr Tan.

However, Justice Chan Seng Onn noted from the video that the taxi was beside the lorry and there was instead a bus "at a distance" behind Teo's vehicle.

The judge also agreed with DPP Choong that the second charge against Teo - failing to report the accident to the police within 24 hours - was made out.

The DPP had said in his written submissions that Teo knew an accident had occurred with Mr Cheung, despite the driver claiming that he had subjectively assessed the cyclist to be fine and other factors such as a language barrier between both men.

He was therefore obliged to either provide his particulars to the cyclist or lodge a police report within 24 hours but did neither, DPP Choong added.

Justice Chan said that Teo's sentence was not "manifestly excessive", given that Teo's act of swerving his lorry to hit Cheung's bicycle was not only rash but also intentional.

"It was a very dangerous act, having viewed the video, and I will therefore also uphold the period of disqualification," the judge added.