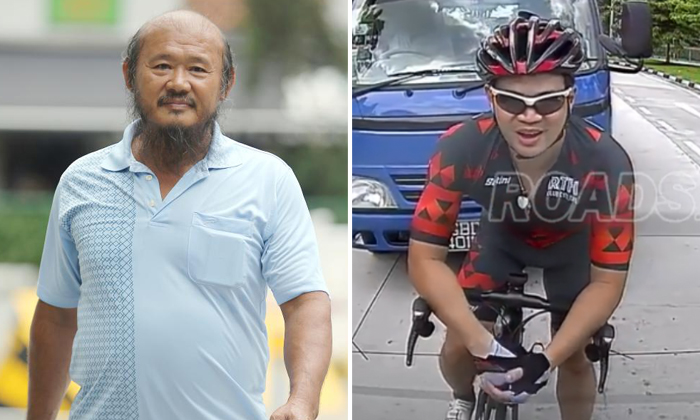 A lorry driver seen in a viral video having an altercation with a cyclist was convicted on Tuesday (Dec 17) of causing hurt to the latter by performing a rash act.

On Tuesday, the judge said that Teo had "deliberately swerved" his lorry into the cyclist, Mr Eric Cheung Hoyu, on Dec 22 last year.

Mr Cheung, 35, had earlier testified that Teo hurled obscenities at him after the incident.

He also said that the older man's tone of voice was "aggressive" and he showed "lots of anger".

The British national added that the lorry driver drove off without leaving behind his name and contact details.

Mr Cheung had earlier pleaded guilty to committing mischief and causing an obstruction by riding his bicycle in the middle of the lane instead of the leftmost side.

Shortly before the incident on Dec 22 last year, Mr Cheung and a friend were cycling on the left lane of the two-lane Pasir Ris Drive 3 at around 11.45am.

The Straits Times had reported that Teo tried to overtake Mr Cheung by using the right lane but could not do so as there were other motorists.

Mr Cheung later raised his right hand and struck the lorry's side-view mirror, breaking off portions of it.

Teo's lorry then swerved to the left and collided with Mr Cheung, who fell off his bicycle onto a grass verge, stated earlier court documents.

During the trial, Teo testified that he swerved left in Mr Cheung's direction as he heard a taxi sounding its horn. The Singaporean also said that he then heard the sound of "something breaking".

He said that when he got out of his vehicle, Mr Cheung shouted a vulgarity at him.

Deputy Public Prosecutor Gabriel Choong had earlier asked Teo if he was unhappy that his side mirror was broken.

Teo replied: "Why would I be unhappy with the mirror? It only costs $15. I just took it as my misfortune. I just wanted to ask (Mr Cheung) why the mirror was broken."

Teo will be sentenced on Jan 14 next year.

Offenders convicted of causing hurt by performing a rash act can be jailed for up to a year and fined up to $5,000.

First-time offenders convicted of failing to report an accident to the police within 24 hours can be jailed for up to three months or fined up to $1,000.