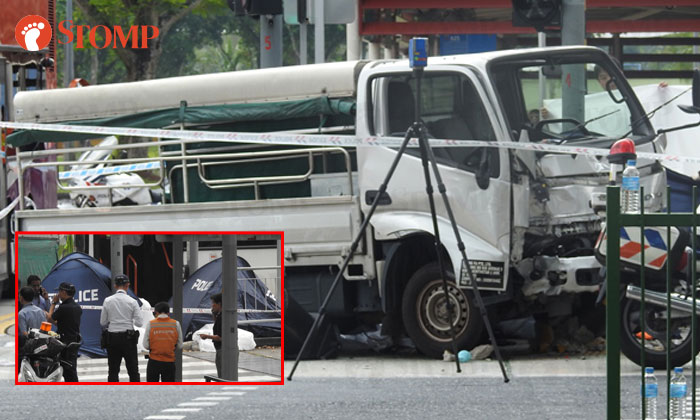 A 25-year-old lorry driver was charged on Tuesday (April 25) with causing the deaths of three pedestrians after allegedly driving his vehicle in a dangerous manner near Yio Chu Kang MRT station on Monday (April 24).

Singaporean Xu Kai Xiang is said to have failed to maintain proper control of his lorry while he was driving along Ang Mo Kio Avenue 6 towards Marymount Road at around 9.30am on Monday, reports The Straits Times.

Stomp earlier reported on a video contributed by Stomper Lee that showed the lorry mounting a kerb and ploughing into the pedestrians before surging forward and hitting a stationary bus at the entrance of Yio Chu Kang bus interchange.

According to court documents, the lorry then veered to the right and hit a bollard before coming to a stop.

The Singapore Civil Defence Force (SCDF) told Stomp that its officers had to extricate two pedestrians from underneath the lorry using a rescue lifting airbag.

All three victims were pronounced dead at the scene.

Xu suffered injuries and was conscious when taken to Khoo Teck Puat Hospital.

He was later charged in hospital on Tuesday and was offered bail of $15,000.

His case has been adjourned until April 30.

If convicted of causing death due to dangerous driving, Xu can be jailed for up to five years.