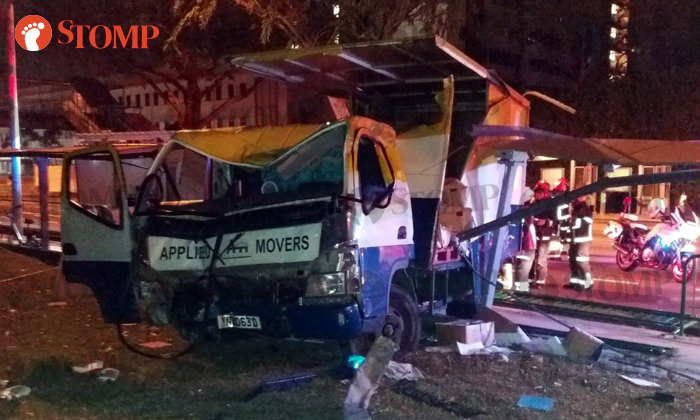 A 34-year-old man was arrested for suspected drink-driving after crashing his lorry into a sheltered pedestrian walkway along Serangoon Road at midnight today (March 12).

Stomper Divya was at the scene, near Boon Keng MRT Station, and heard a loud crash.

He recounted what he saw: "There was one person in the lorry.

"The Singapore Civil Defence Force (SCDF) promptly arrived and took the casualty out of the lorry. He was then brought into an ambulance.

"The lorry was also in a very bad condition after ramming into the sheltered walkway."

Photos contributed by Divya show how the lorry had crashed through and damaged a portion of the sheltered walkway.

The lorry's front bumper was also caved in.

The lorry driver, a 34-year-old man, was conscious when conveyed to Tan Tock Seng Hospital.

He was subsequently arrested for suspected drink-driving.