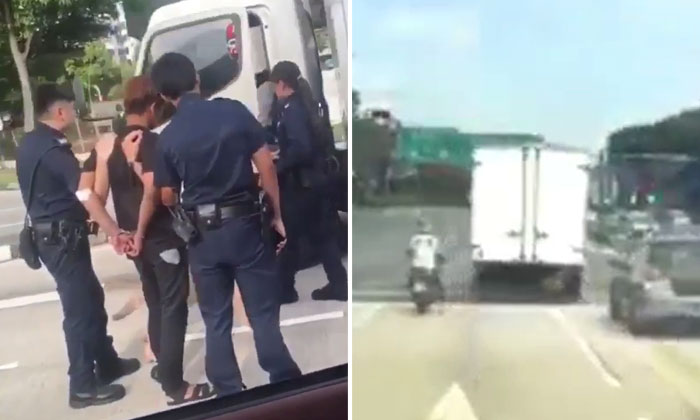 A 25-year-old lorry driver and his two female passengers, aged 26 and 31, were arrested for suspected drug-related offences after leading police on a car chase in Jurong West on Saturday (Mar 28).

The man was also arrested for rash act causing hurt.

Several Stompers alerted Stomp to videos of the incident, showing the lorry beating a red light and narrowly avoiding a motorcyclist while being pursued by a police car.

In one of the clips, a man is seen in handcuffs as officers search the lorry.

In response to a Stomp query, the police said they conducted checks on the lorry driver and his passengers at a heavy vehicle carpark along Boon Lay Way at 3.50pm.

"During the checks, the driver refused to comply with the officer's instruction and sped off with his passengers," a police spokesman said.

"After a brief pursuit, the lorry subsequently came to a stop along Jurong East Street 21 and the male driver was subsequently arrested for rash act causing hurt and suspected drug-related offences.

"Both female passengers were arrested for suspected drug-related offences."