'Looting culture' at NTU dorms, where students help themselves to other people's belongings 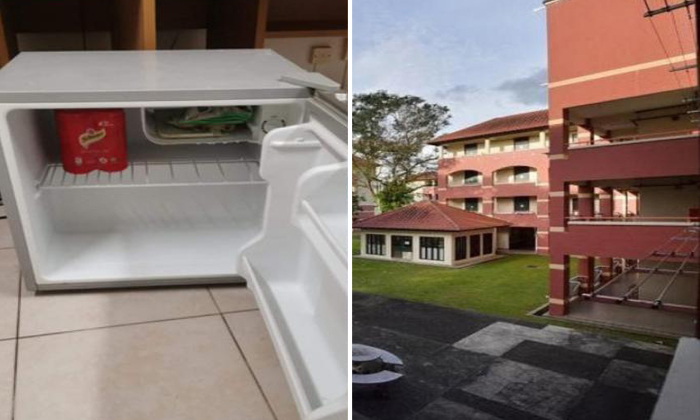 The student’s plight was posted on Nanyang Technological University’s (NTU) Reddit page, detailing how the refrigerator was stolen by an unknown individual.

In the post, Lee431oo wrote that he had placed the refrigerator outside his room next to his door as he hadn’t “finished moving into his room yet”.

Typically, the refrigerators used by students living in dormitories are miniature bar fridges, about 1m high or less.

While he was studying, the alleged thief knocked on his door and asked to borrow a trolley. Little did Lee431oo know the trolley was actually for moving the fridge away.

“I thought they just needed (a) trolley and didn't expect they were gonna move my refrigerator by using (it),” said the student.

“To be honest, this is my first time experiencing such a thing. I don't know why some freshies always think that stuff placed next to the door is free?”

He said he did not want to call security because he didn’t want to “embarrass” the other person, adding that an “8th-hand refrigerator” did not cost too much.

Belongings getting swiped are allegedly not uncommon at NTU, according to some students.

Student Cathryn Wong, 25, told TNP how her lamp that had sentimental value was whisked away while she was moving into her room for the upcoming semester.

She stated that the timing of the incident took place during the period when freshmen had started moving into her hall.

“My guess is that an oblivious freshman probably misconstrued the item outside of my room to be unwanted and thus took it for themselves.

“I know of certain hall cultures with an unspoken understanding that items left outside of hall rooms are free to be taken by other students, provided it does not bear a written note stating otherwise.

“This culture is passed down by seniors to juniors… However, I feel that the least they could do is ask before helping themselves.”

The so-called “culture” is mentioned in the comments section of user Lee421oo’s thread on Reddit.

User thson08 said: “I came here just last week and was really surprised when seniors I know said I could (take) things people leave outside their rooms.”

The user added that two friends had “looted” fridges they found at other halls.

Student Michael Ng, 23, told TNP that he used to feel safe enough to leave his shoes and sports equipment outside his room. But after hearing of many cases of shoes and other items being stolen, he no longer does so.

“It's become quite an issue,” the third-year student lamented.

“NTU is honestly a very public place. Compared with NUS, it is very easy to gain access to the corridors of dorms, and only a few halls have added security measures.

“If you knew where to go, a random stranger could reach the door of your dorm by taking the 179 bus (and) walking a short distance.”

Another student who declined to be named told TNP that there is always a “high chance” that items ordered online and delivered to the halls could get stolen if the recipients did not collect them promptly.