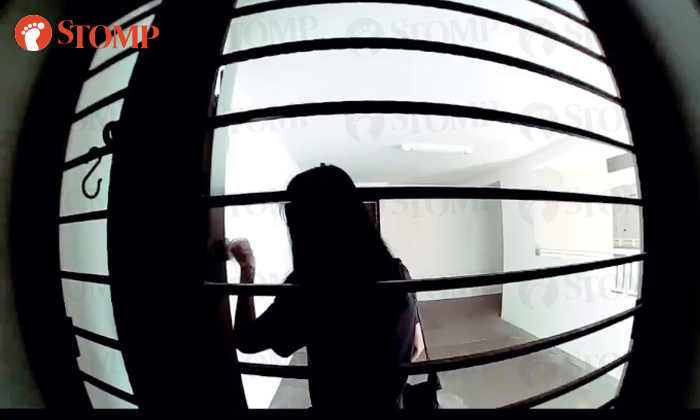 A Punggol resident's suspicions were raised when he learnt that a stranger had looked through his riser while wearing gloves.

Stomper Zamsmail said he was reviewing his CCTV footage about a month ago when he noticed something unusual.

Zamsmail did not share his exact location, but told Stomp that it was at a "new BTO" at Northshore Drive.

He recounted: "I was surprised to see a lady looking through my dry riser closet in a rather suspicious manner.

"Considering that many of our parcels are left in there by the delivery persons when we are not at home, I presume she was looking randomly to see if there are any parcels left unattended.

"Do note that she was also wearing gloves probably to avoid detection by fingerprints."

A video submitted by Zamsmail shows the woman opening the riser's door while wearing plastic gloves and carrying a black bag. She is then seen peeking inside the riser, closing the door and walking away.

The Stomper added: "My CCTV camera is disguised as a peephole in the door, so it’s hard to notice that it’s there.

"I'm just hoping to spread awareness that this is going on so people are more vigilant. Thank you!"

Related Stories
Man puts on an act to steal 2 pairs of Adidas slippers in Hougang, deserves a Razzie
Man takes woman's belongings from her basket at Value Shop, puts them in his own trolley
Auntie takes bag of items belonging to shopper who's still in Japan Home store
More About:
unusual