Woman parks in family lot, then tells man with kids that she has 3 cars and money to burn 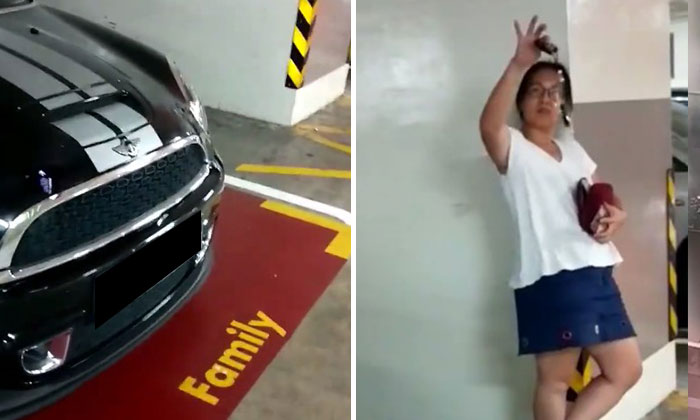 A Facebook user, Daniel Choo recently posted about an infuriating encounter at Jurong Point, when a female driver allegedly cut the queue and took the family lot.

When confronted, the woman told Daniel that she has ‘money to burn’ while being filmed.

Footage of the confrontation was subsequently uploaded on Daniel’s page.

In the video, the woman tells Daniel:

She then boasts that the MINI Cooper parked in the family lot was not her only car, and retrieves a bunch of car keys from her purse.

Daniel then tells her that he was going to upload the video onto Facebook to ‘let everyone know, to which the woman replies:

“Fine, go ahead. Everybody knows I got three cars. Go head.”

She openly invites Daniel to take a photo of her car too, and Daniel says that he already did.

The woman elaborates her point:

“That does not mean your child got priority. (It’s) first-come, first-served.”

The woman writes the situation off as ‘stupid’, and Daniel retorts:

“This is not stupid. This is you being a very inconsiderate person.”

She reiterates to Daniel the fact that she has three cars.

A security guard arrives at the scene and shakes the hand of the woman.

The matter is promptly resolved with the woman driving her car out of the lot.

In Daniel’s post, he also addresses claims that he was being self-entitled.

“I just wanna clarify, this post is not because we are “not happy” that we didn’t get the family lot.

Daniel goes on to explain that these lots are designed to be bigger to facilitate young children and elderly parents boarding or alighting the vehicles.

Furthermore, items such as prams and wheelchairs should also be taken into consideration.

During the time of the incident, Daniel says that he had three children with him, including a baby.

“We just want people to know the importance of the family lots to someone who needs it more than just  anyone who is driving alone.”

Related Stories
Is your car so special that it needs a shelter?
Are people using underwear to 'chope' shared bikes now or is this a prank?
Subaru driver holds up traffic at Punggol for 3 minutes -- only to park in loading bay
More About:
inconsiderate
inappropriate
parking