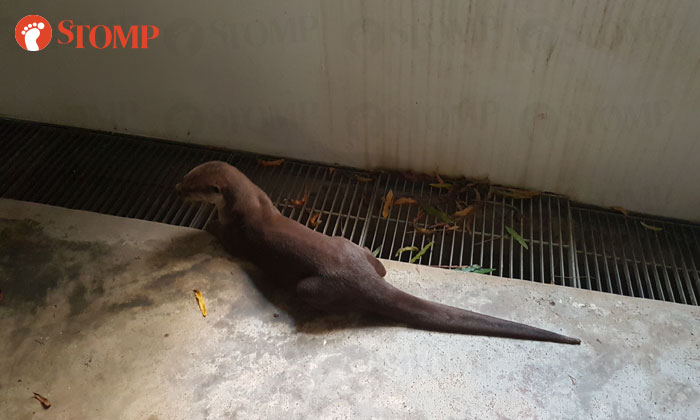 Stomper Chan Hon was not expecting to find an otter in the basement carpark of Villa Marina condominium in East Coast on Sunday evening (May 5).

It was the first time Chan Hon had spotted an otter on the property.

"I contacted Ottercity on Facebook after I saw the otter at about 6pm," he said.

"When their people arrived, the otter escaped and ran into a drain."

In response to a Stomp media query, a spokesman from Ottercity said they had been tracking the two-and-a-half-year-old Bishan family otter for the past three days in the east after it was seen in Siglap.

"As part of the Otter Working Group (OWG) members, we are working closely with Animal Concerns Research and Education Society (Acres) and NParks," he said.

"We were all on site till late last evening.

"We couldn't get to her as she was hiding inside a covered drain, we decided to let her rest.

"This morning (May 6), the otter made her way to a canal.

"We hope she will find her way to the sea."

The spokesman added that the otter did not have any visible injury apart from its ear being bitten off in a family fight a few weeks ago.

"She looks like she is recovering well from the ear wound," he said.

"We think she is just exhausted."