Local songwriter pays tribute to our hawker culture, teaches us to appreciate Singapore 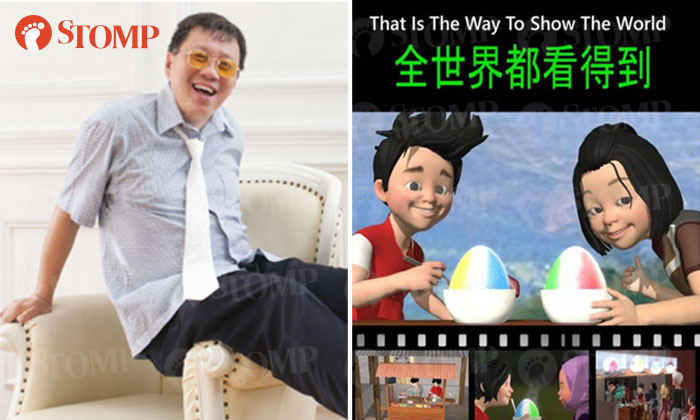 Stomper Richard Wan, a local songwriter, wrote the song "That is the Way to Show the World" which was posted on YouTube on Sep 4 to pay tribute to Singapore's heritage.

Richard, 56, sent Stomp the video to remind people of his childhood and to appreciate the timeless treasures that Singapore holds.

The song took Richard two months to produce and tells a simple story of a hawker family, struggling to make a living for their children by selling ice kachang, a red bean dessert.

"The song was written for leisure actually since last year but I shelved it for some time.

"It was later when I read about Singapore hawker culture often in the papers and that really inspired me to do up an animation MTV related to creativity & innovation on food.

"An Indonesian group later translated it in Malay in Indonesia entitled, Yuk Kreatif and I heard it was well liked by the Indonesian community there," he added.

Richard told Stomp he has been writing songs since 1985, ranging from children songs, National Day Parade themes, television themes, and many other album tracks, for local & overseas celebrities.

Some National Day themes he said he has written include:

He chose to make an animated video because he thinks it is the best medium for children who love both music and cartoons.

In the video, the characters are seen enjoying ice kachang.

Richard shared with Stomp why he used it and said: "Ice kachang has been a popular dessert since the 1950s and was served by itinerant street hawkers over pushcarts in Singapore. The many Singaporeans who grew up during that era, they would surely have fond memories of it.

"Hawker life is tough but the hawkers have persevered. We learn through hardship to attain success. So I have written this English song - to share online with everyone across the world -  That is the way to show the world."

He said he hopes to prepare children for a globalised world and strengthen links to the Asian heritage.

According to him, he has also won many awards for his works, which include:

A few of Richard Wan’s children works have been on Music Chart as Number One song in Guangzhou, China.