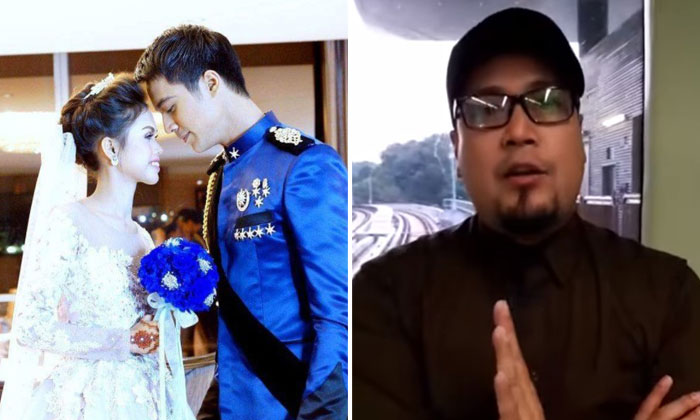 Singapore singer and actor Aliff Aziz was in the news last week when he was caught by his wife Dayang Ara Nabellah Awang Astillah (aka Bella Astillah) with another woman at a karaoke centre in Cheras on Jul 27.

There were also reports that he had allegedly assaulted Bella as she suffered minor injuries to her knees and face although she has denied it.

She has also withdrawn a police report she made against her husband following the incident and denied that he threw a phone at her during their argument.

The New Straits Times quoted Bella: "There was a scuffle between us at that time and I was unaware of the injuries until I left the karaoke centre. I was not assaulted (as suggested by news that has gone viral) and I was disappointed at reading such news."

"I thought about everything that has happened. I spoke to God... I thought about my wife. She is so patient with me and I don't want to lose her," he told the press.

The 26-year-old told the media: "I admit my mistake in going out with another woman and for hurting my wife. I was aware of what I was doing at the time of the incident.

"I am man enough to admit this mistake and I do not want this to happen again. This will the first and the last."

"I have apologised to Bella and her family. Bella has forgiven me but I understand that even with a million apologies, it would not be easy to fix the hurt I have caused to her."

Bella, 23, who gave birth to the couple's first child last month said that she has forgiven him but that it will take "a long time" to forget what had happened.

"But I cannot be selfish and must think of our son," she said.

With regards to the incident, Malaysian actor Zed Zaidi has come out to warn Aliff Aziz about his behaviour.

In a video, the President of Artistes in Malaysia told Aziz not to repeat his mistake a second time and that if he did, he would "go find him".

In the video interview he said:

"In my opinion, Aliff is not a gentleman because men should respect women and especially their wives as they are always behind us."

He also threatened that he will make sure Aliff cannot enter Malaysia again should he slip up one more time.

Related Stories
'My husband spends more time with his mistress and their kid than with me'
'I exposed my adulterous sister right before her wedding'
More About:
entertainment
Aliff Aziz
third party
caught cheating
Malaysia