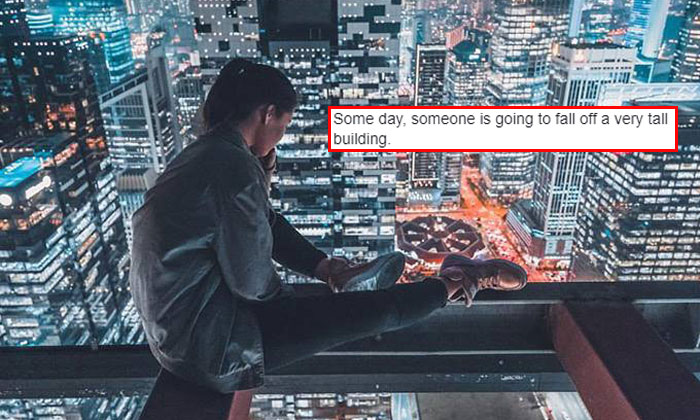 Singaporean photographer Darren Soh took to his Facebook page to address the trend of Instagram photographers putting themselves and their models in dangerous situations for the 'perfect' photo.

In his post, he made an example of one such Instagrammer who had posted photos of his friend sitting on a beam at the top of a high-rise building in Singapore.

"He probably thinks he has some balls to be pulling off a stunt like this, putting his friend and himself in harm's way to show with photographic proof that yes, somehow he managed to trespass into Marina ONE and dangle his friend off the East Tower's High Rise Lift Shaft Building Maintenance Unit's roof rails."

Darren went on to identify the photographer, posting his full name and school details. Stomp will not be publishing this.

He then accused such Instagrammers of trying to "up each other on this stupid game of trespassing into private property and dangling a pair of legs off the edge".

He said that such antics makes life difficult for himself and other working photographers who have to deal with the same security personnel that these Instagrammers "play cat and mouse with".

"Someday, someone is going to fall off a very tall building," he said.

"Must we wait till then for people to wake up?"

He ended his post criticising the Instagrammer for calling himself a photographer and that it was an "insult" to him and his colleagues.

Several netizens agreed with Darren's comments and slammed the dangerous scenarios such "thrillseekers" put themselves in.

Others acknowledged that Instagrammers should not engage in "rooftopping" but defended the the privacy and talent of the guy Darren was slamming.