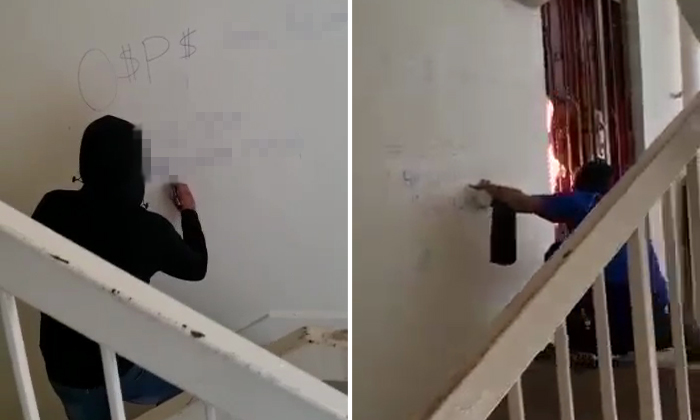 A video showing the door of a residential unit being set on fire and the wall being scribbled on is linked to a loanshark harassment case that occurred earlier in September, said the police.

Two men, aged 20 and 21, had subsequently been arrested and charged in court for their suspected involvement.

The police's response comes after the re-emergence of the video, which is currently circulating on social media.

In the video which several readers alerted Stomp to, a hooded figure can be seen scribbling 'O$P$' and the debtor's personal details on the wall at a staircase landing.

Someone is also seen splashing kerosene at the unit and starting a fire.

In a Facebook post on Wednesday (Nov 17), the police said they are aware of the video "that depicts a case of loanshark harassment where the door of a residential unit was set on fire, with writings scribbled on the walls beside it."

The incident in the video is linked to a loanshark harassment case that happened on September 20, they added.

The police had been alerted to two cases of loanshark harassment along Hougang Ave 5 and Chai Chee Road that day, where the doors of the residential units were set on fire. Writing was also found on the walls beside one of the units.

Through investigations and with the aid of images from CCTV and police cameras, officers established the identities of the two men involved and arrested them in the vicinity of Telok Blangah and Sembawang Way on September 24.

During the operation, drug paraphernalia was also found and seized from both men.

The men were charged in court on September 25 under the Moneylenders Act (Revised Edition 2010).

For first-time offenders, the offence of loanshark harassment carries a fine of between $5,000 to $50,000, with at least five years in jail and up to six strokes of the cane.

The police said they have zero tolerance towards loanshark harassment activities, adding: "Those who deliberately vandalise properties, cause annoyance to the public or disrupt public safety, peace, and security, will be dealt with severely in accordance with the law.

"Members of the public are advised to stay away from loansharks and not to work with or assist them in any way. "

The public can call the police at '999' or the X-Ah Long hotline at 1800-924-5664 if they suspect or know of anyone who could be involved in illegal loansharking activities.