Live murtabak station at staircase landing "because it's Yishun"? You've got it all wrong 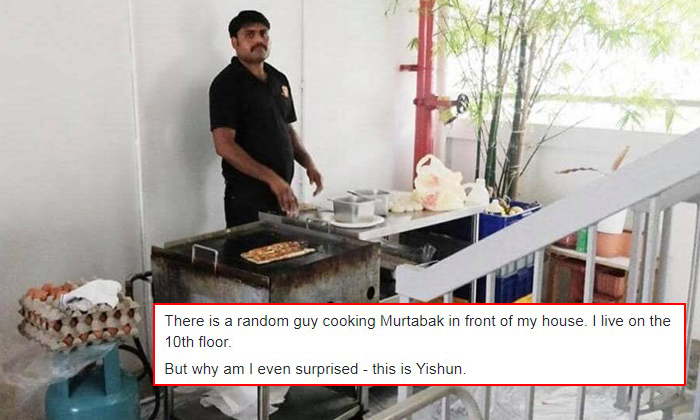 The random appearance of a live murtabak station at the staircase landing of an HDB block is odd enough -- but even more so when this is in Yishun.

Ask anyone in Singapore and they would know of the neighbourhood's infamy.

In a Facebook post on Sunday (Oct 7), Yishun resident Shaun Ho shared how "there is a random guy cooking Murtabak in front of my house".

Shaun, who lives on the tenth floor of an unidentified block, even quipped: "But why am I even surprised - this is Yishun."

Naturally, his post -- which has since garnered more than 1,800 shares -- led to numerous jokes at the expense of the infamous estate.

Another Facebook page that reposted Shaun's photo went even more viral with over 5,500 shares and nearly 700 comments. 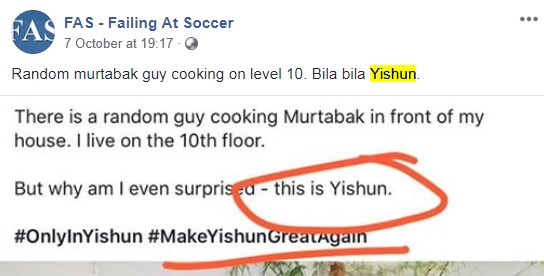 However, some netizens did not fancy the focus on Yishun in the repost and felt that it put the estate in an even worse light.

Shaun later clarified in his original post: "For avoidance of doubt, this is a live station for a catered event and I [heart] Murtabak."

When contacted by Stomp, Shaun declined to reveal the exact location of the block due to privacy concerns.

However, Stomp understands that the live murtabak station was part of a catered buffet.

The unusual spread was for a special occasion and celebration, which some neighbours had been invited to as well.

Looks like it was a joyous event that residents got to enjoy. Yes, in Yishun.