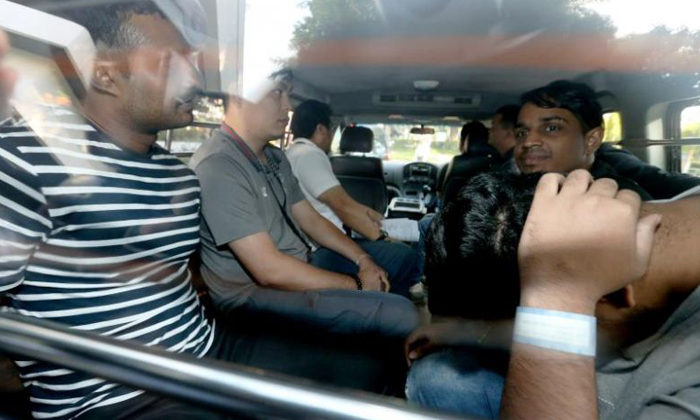 A teenager was among a group of five who launched a vicious attack on a man in broad daylight last year that led the victim's right foot to be partially amputated.

Photos taken by onlookers of Mr Dhines Selvarajah, 27, lying injured on the road in Little India on July 25 were posted on social media.

One of his attackers, Sharvin Raj Suraj, 18, pleaded guilty on Friday (June 14) to one count each of rioting with a deadly weapon, being part of an unlawful assembly and having a knife in his possession.

Sharvin is the first member of the group to be convicted for taking part in the attack.

At around 2.15pm on the day of the attack, Mr Dhines was sitting at a bus stop in Serangoon Road when he was spotted by the five Singaporean men, who were in a car.

Deputy Public Prosecutor Pavithra Ramkumar told the court that the men had "previous disputes" with Mr Dhines and wanted to attack him. Court documents did not disclose details of the disputes.

Dinesh, the driver, stopped the car by the side of the road. After the five men got out of the car, three of them retrieved some weapons from a box that Arjun had placed in the boot.

"Haresh confirmed the identity of the victim and signalled to the accused and co-accused persons to attack," DPP Pavithra told District Judge May Mesenas.

The men left in the car after the attack.

An ambulance took Mr Dhines to Tan Tock Seng Hospital where he was found to have a partial amputation of his right foot and a wound at the back of his head.

He was warded for a week and given three months of hospitalisation leave. The Straits Times had earlier reported that police nabbed the five within 16 hours of the attack.

Separately, Sharvin admitted in court on Friday that he had a knife in his possession on June 3 last year. He was also part of an unlawful assembly while out on bail in January this year.

DPP Pavithra urged Judge Mesenas to call for a report to assess Sharvin's suitability for reformative training, stressing that the attack on Mr Dhines was unprovoked.

Defence lawyer Timothy Ng asked the judge to call for a report to assess Sharvin's suitability for probation instead. He said his client is still young and had no prior convictions.

Judge Mesenas has called for reports to assess Sharvin's suitability for both reformative training and probation. The teenager is expected to be sentenced on July 5.

Offenders convicted of rioting with a deadly weapon can be jailed for up to 10 years and caned.