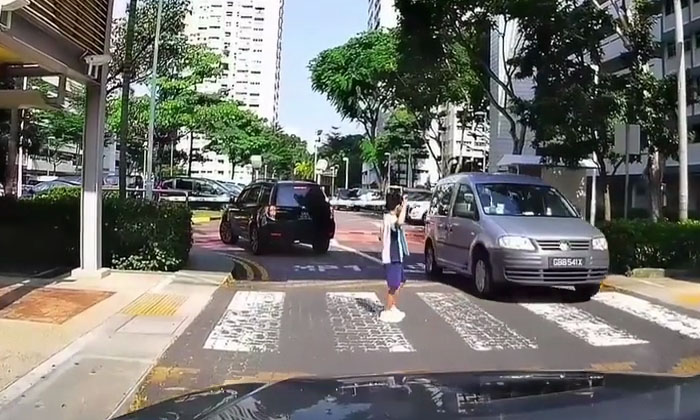 A van was caught on video driving straight through a zebra crossing at Marine Terrace without slowing down, resulting in a near-accident with a small boy.

The incident reportedly took place on Monday (Sep 24) at 4pm, according to a post on SG Road Vigilante's Facebook page.

Stomper Jayden had alerted Stomp to a video of the incident that was posted on the Facebook page.

In the video, the boy is seen raising his right arm upon reaching the zebra crossing.

While the driver of the dash camera slowed down and came to a stop, the van proceeded to go ahead without decreasing its speed.

Fortunately, the boy halted in his steps when he saw the van so no accident occurred.

Although several netizens blamed the driver for not coming to a stop at a zebra crossing, others gave him the benefit of the doubt and said that the view of the van driver might have been obstructed by the black car that was entering.

However, others refuted the last claim by stating that it is necessary to at least slow down at a zebra crossing.

Jayden said that he was shocked at how "frequent such reckless acts goes on every day".

"The images of the two Nanyang Primary School students who almost got ran down by a car are still fresh in my mind," he said.

"The boy looks to be even younger than the previous two! Yet even at such a young age, he was taught well to raise his hand to catch drivers' attention when walking across a zebra crossing.

"Yet, some drivers just don't care."

Related Stories
Students raise hands while crossing road... but have close call with driver who speeds past them
Wah, this van driver can steer wheel and talk on the phone -- at the same time
Jaguar driver jumps queue by going against traffic in Kaki Bukit carpark, allegedly causes fender bender
More About:
dangerous driving
reckless
zebra crossing