Lion-hearted fighter beats rare form of leukaemia not once, but twice 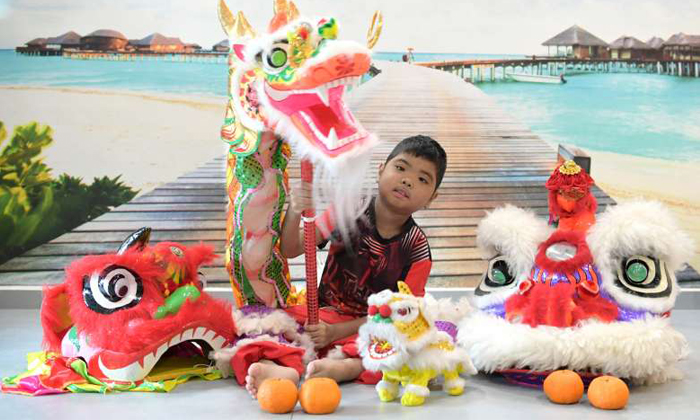 Ten-year-old Boon Kye Feng prances around the living room in furry purple pants that match the lion's head he is wearing.

He lifts the head and moves it from side to side to a beat only he can hear.

Even when the little lion gets thirsty, he drinks water through the opening in the head.

Seeing him at play, it may be difficult for strangers to tell that he has spent almost half his life battling leukaemia.

His family fought it along with him, gifting two transplants - cord blood from his baby sister and stem cells from his mother - to keep him alive.

Despite the intensive treatment, his parents said he had remained positive and playful.

It had started in late 2011 when Kye Feng developed spots and bruises which his parents thought were sandfly bites.

When the spots appeared a second time, his mother, Mrs Celine Boon, decided to take him for a check-up.

Doctors found that his white blood cell count was very high and told the family he could have leukaemia (cancer of the blood).

It was diagnosed as juvenile myelomonocytic leukaemia (JMML), a rare form of the disease.

But Mrs Boon, 38, was not too surprised.

This was because Kye Feng and his twin brother, Kye Teck, had previously developed juvenile xanthogranuloma (JXG), a skin disorder that is usually benign and self-limiting.

They also have an older sister, now 16, who was unaffected.

While reading up on JXG earlier, Mrs Boon had come across a potential link to JMML.

She said: "Still, I had never expected that it would happen to my son. I was quite alarmed."

JMML is so rare that blood samples had to be sent to Germany to confirm the diagnosis.

Kye Feng began chemotherapy at KK Women's and Children's Hospital (KKH) in 2012 to control the condition while waiting for a bone marrow transplant.

Although KKH doctors had not seen a JMML case in about 10 years, they did the transplant as there were few other options.

His father, Mr Roy Boon, 46, said: "It was all trial and error. There's no exact treatment for JMML."

Mrs Boon was then pregnant with their fourth child and doctors said the baby girl's cord blood could be used for the transplant as there is a 25 per cent chance of a match between siblings.

Thankfully, it was a full match for Kye Feng, who had the transplant and recovered well.

He looked forward to starting Primary 1 with his brother.

But before the March holidays of his first year in school, doctors noticed that the percentage of donor cells in him was beginning to fall, signalling that there could be a problem.

When it became clear that the cancer had returned, Mrs Boon said she broke down and cried.

"I was shocked. There weren't any physical symptoms. Why did it happen so quickly? It wasn't even one year after the transplant and things had looked so promising," she said.

The family sought a second opinion from the National University Hospital (NUH) and entered into the care of Associate Professor Tan Poh Lin from the paediatric haematology-oncology division.

While doctors from both hospitals suggested a second transplant for Kye Feng, there was more bad news.

His illness was mutating into mixed-phenotype acute leukaemia, a combination of two forms of cancer.

He also faced a life-threatening infection that caused high fever and bloating.

Besides beginning palliative care to improve his quality of life, the family continued to push for treatment, including natural killer-cell therapy and the removal of Kye Feng's enlarged spleen in a complicated seven-hour operation.

Even though the test results showed that leukaemic cells remained in his bone marrow, Kye Feng had a second transplant in September 2015, this time using stem cells from his mother.

"He was fighting hard. If I didn't give him the chance, I would never know if he could have survived."

Dr Tan said: "I believe Kye Feng is a 'miracle'. We have all learnt a lot from him, not only in the science of managing the disease and the doctor-patient relationship, but also in his love of life, and his fearlessness and resilience, despite the years of pain and suffering."

The crucial three months after the transplant passed by without issue, but the boy developed a graft versus host disease (GVHD) one year later.

Still, his parents were relieved that it was not a second relapse.

He was put on medication for GVHD and will recover completely.

In the meantime, the family is treasuring the time they can spend together.

Mrs Boon said: "We will relax and go with the flow, as long as Kye Feng is happy."