Linda Chung in Singapore: 'There's no need to hide my kids from the spotlight' 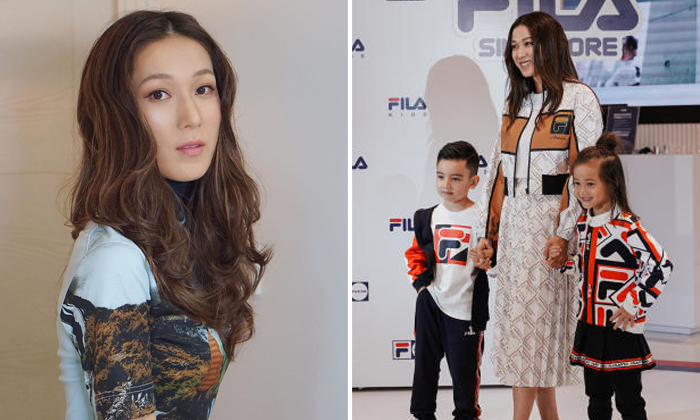 While some celebrities take great pains to keep their young children out of the public eye, Hong Kong actress-singer Linda Chung has no qualms about putting her two kids in the limelight - even getting them to star in her latest music video.

Insisting she is just a normal person who has a slightly different career from other mothers, the 35-year-old - who has a three-year-old daughter and an 10-month-old son - told The New Paper in an interview: "There is no point overstrategising or overanalysing what will happen to my kids if I were to place them in the spotlight.

"People are going to know that I'm their mother when I take them to school in the future. There is no way and no need to hide."

Chung, who was in town for the grand opening of Fila's flagship store at Jewel Changi Airport last Thursday, released her music video titled Mommy I Love You So in June after a three-year hiatus from showbiz.

In it, she is seen spending time with her kids and her chiropractor husband Jeremy Leung, who is 13 years older than her.

The musical tribute to her children and her own mother took her about five minutes to compose. Chung said it was the image of her daughter sleeping that inspired her to pen the melody and lyrics.

"At that moment, I wished I can live as long as (possible) so that I can stay by her side and watch her grow up."

While filming the video, Chung said she had to make sure the shoots ended by 1pm.

"My kids have naps, and when it's past their nap times, they start to cry and throw a lot of tantrums.But I was glad that everything worked out at the end of the day."

On how marriage and motherhood have changed her, Chung admitted this stage of her life was a steep learning curve. It helped her grow quickly as a person and pushed her to cooperate and live with another person.

Becoming a mother taught her to appreciate and love her own mother even more.

She said: "When you are younger, you think it's easy and take your mother for granted because (you think she) is supposed to be there.

"But once they're not there, you realise that their intentions are good and they're just playing a guardian angel who is trying to be there for the rest of your life."