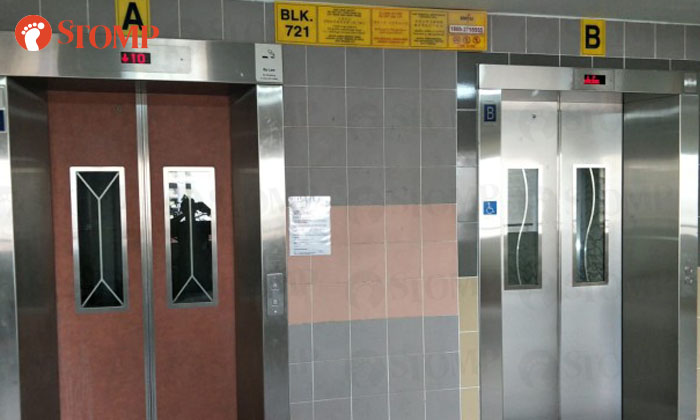 A lift at Block 721 Woodlands Circle broke down twice in a day leaving, Stomper Remy frustrated.

This is not the first time in the year that the lift has broken down.

In a previous Stomp report in August, one of the lifts at the block was closed for two hours due to maintenance.

In the most recent incident, Lift A broke down two times on Dec 26.

Remy said: "The other lift at the lobby, Lift B, has not been functional for a while as it is undergoing maintenance.

"We only rely on Lift A which broke down twice that day.

"My wife left the house to head for work at about 7.30am and told me that the lift had broken down.

"She took the stairs and said that while she was walking downstairs, she saw a wheelchair-bound resident being helped down by a family member."

Remy said that he found the lift functioning again soon after.

At about 6.20pm, Remy wanted to go downstairs and realised that the lift was not working again.

He told Stomp: "I took a video of the lift this time.

"I called EMSU at 6.24pm and technicians came to fix the lift.

"The operator on the line told me that she was aware of the breakdown earlier in the day and that technicians had come down to the block to fix it the first time.

"She said that technicians would come down to look at it again.

"They arrived and the lift was in working condition at about 7.25pm."

In one of the videos that Remy sent, the lift button does not light up when it is pressed.

In another video he sent, residents of the block can also be seen using the stairs.

Remy can be heard in the background of the video saying: "How would you feel if you need to use the lift and it has broken down?

"If someone is in need of emergency and the ambulance crew cannot reach the person in time?"

He added that the lift has presented a huge problem for residents.

Remy added: "My father-in-law was coming back home and had to wait upstairs for the lift to be fixed.

"He is 73 years old this year. I am worried that an emergency might happen and elderly residents might have to use the lift.

"I also have many elderly neighbours who I am worried about."

In response to a Stomp query, Sembawang Town Council said on Dec 30: "Our investigation revealed that the two breakdowns of lift A at Block 721 Woodlands Circle on Dec 26 were due to door-related problems.

"In both incidents, our technicians on standby responded swiftly and rectified the issue within the hour upon receipt of the feedback.

"As a measure to enhance the performance of Lift A, our lift company will be conducting an additional servicing and thorough inspection tomorrow mid-night (Dec 31).

"We are pleased to inform residents that the other lift (Lift B) that is currently undergoing upgrading will be operational within the next 10 days. This new lift (Lift B) together with the existing Lift A will greatly improve the reliability of the lift operations in Block 721.

"We would like to take this opportunity to explain to our residents that Sembawang Town Council is taking a long-term approach in resolving the problems we face in some of our old lifts.

"A total of 280 old lifts, between 20 and 23 years old, are undergoing lift replacement work. They are very much ahead of the 28 years replacement cycle.

"Despite the efforts the Town Council is putting in to minimise inconvenience, we seek our residents' understanding on the inconvenience caused by the lift replacement work during this transition period."

Some of the additional measures taken by Town Council include: