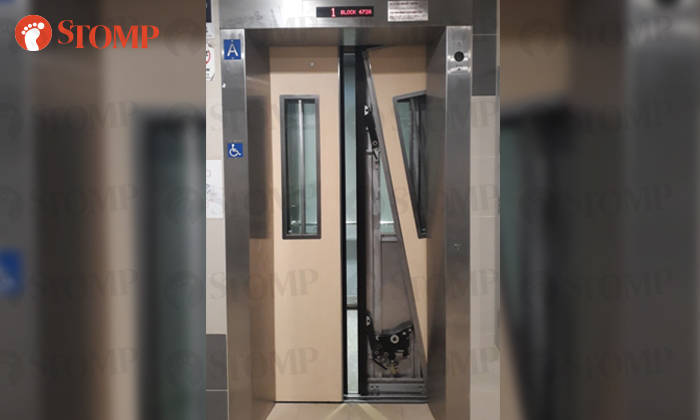 The cause of a dislodged lift door at Block 672A, Yishun Avenue 4 has been identified following investigations, said Nee Soon Town Council.

Stompers Zi and Ai had earlier contributed photos of the damaged lift.

Zi also said that he was in the lift on March 28 when its door malfunctioned.

Nee Soon Town Council was notified of the matter on the same evening and told Stomp in an April 2 statement: "We are verifying initial findings that indicate that the lift door was dislodged by an impact caused by a foreign object."

The lift resumed operation on the same night.

In a statement today (April 26), a spokesman for Nee Soon Town Council said it has completed investigations into the matter and has identified the cause of the incident.

It was found that an elderly resident, believed to have difficulty in walking, had used his personal mobility device (PMD) to jam the door, so as to prevent it from closing while he tried to enter the lift.

The impact had caused the door to dislodge.

Added the spokesman: "We will put up an advisory at the lift lobby to advise residents on the safe use of the lift. Our main concern was for our resident's safety and we are thankful that he is safe and sound."