Lift door at Yishun Block 672A likely to be dislodged by foreign object, investigations underway 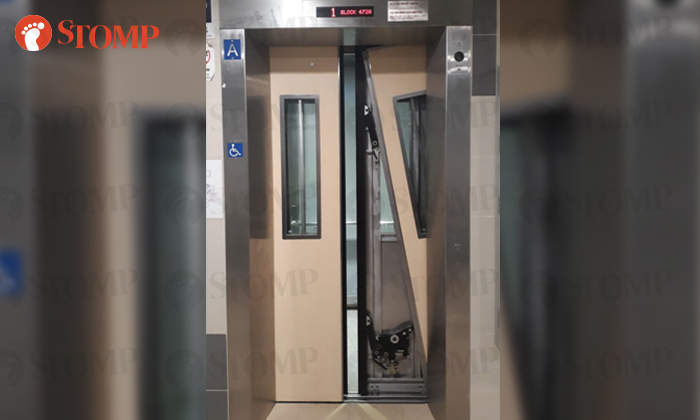 Initial findings indicate that a lift at Block 672A, Yishun Avenue 4 had its door dislodged by an impact from a foreign object, said Nee Soon Town Council in response to Stomp queries.

Stompers Zi and Ai alerted Stomp to the incident with photos of the dislodged door, which had its metal panel exposed.

Ai said that she saw the lift with its dislodged door on Wednesday (March 28) at around noon.

Zi, who had gone inside the lift that evening, told Stomp: "I was inside this lift and the door came out like that.

"Luckily, when I pressed the open button, the door managed to open halfway before it got stuck.

"There was a guy in the same lift with me. He forced the door open and it opened fully. When we got out, the door closed back."

Responding to Stomp queries, Nee Soon Town Council said it was notified of the matter on March 28, at around 7.30pm, and the lift company’s technician was activated immediately.

A spokesman said: "We are verifying initial findings that indicate that the lift door was dislodged by an impact caused by a foreign object."

"The door has since been realigned, and tests carried out to ensure that the lift is operating normally."

The lift was back in operations on the same night, added the spokesman.