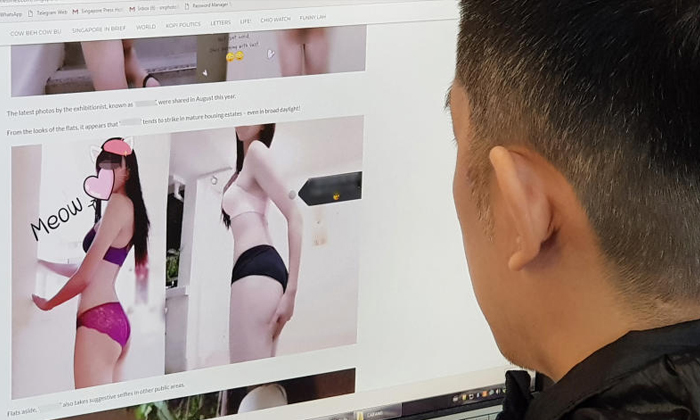 Photos showing a woman posing at corridors and stairwells of HDB blocks, while in various stages of undress, have been circulating online.

According to Shin Min Daily News, a netizen recently shared several 'sexy' photos of the woman and said they were posted online this month.

The woman, who looked to be in her 20s, had reportedly said she was from Malaysia and a permanent resident in Singapore. She also claimed to be working as an administrative clerk, adding that she was married but had no children.

Based on the background in the photos, majority were taken at HDB corridors and stairwells.

The pictures, some of which were taken in the day, showed:

There was a mosiac on the woman's face in the pictures, some of which were accompanied by sexually suggestive captions.

One caption said that the images were taken by a female friend who might even join in the photo shoot someday.

A lawyer that Shin Min spoke to said that the woman's indecent exposure in public places fell under the Miscellaneous Offences (Public Order and Nuisance) Act.

Those convicted of the offence are liable to a jail term of up to three months and/or a fine of up to $2,000. In addition, posting the photos online is also a punishable offence.

The lawyer added that the friend who helped to take the indecent photos and whoever circulated them might have also violated the law.