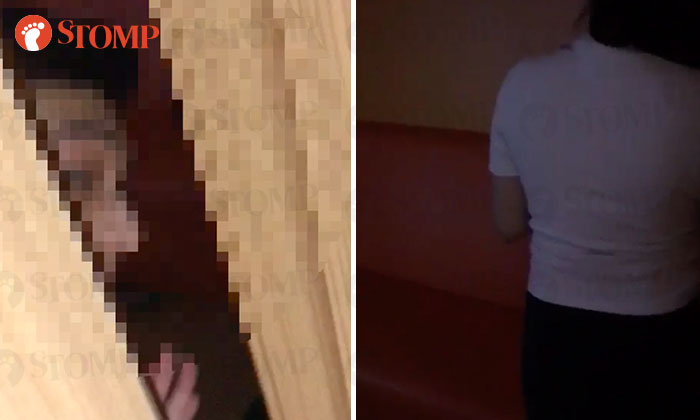 Stomper Krist came across a couple behaving strangely in a karaoke room during a routine check, only for the man to plead with her to allow his companion to “put on her clothes” while holding the door shut.

The incident happened at MANEKINEKO, a karaoke outlet in Bugis+ shopping centre on Thursday (Aug 2) afternoon.

Krist, an employee of MANEKINEKO, told Stomp in a phone interview that the couple arrived in the shop at about 12.05pm. At the time, the branch was having a promotion, with each customer having to pay only $10 for a two-hour karaoke session.

Krist said that she recognised the couple as they visited the branch occasionally. According to Krist, the couple usually visits in the afternoons, between 11am to 2pm, but would leave before their two hours are up. She added that the outlet was usually less crowded during the afternoons.

The couple was assigned Room 5, which was situated close to the cash register.

“After they went in, they immediately switched off the lights so it was quite dark.

“I didn’t suspect anything because that’s what people usually do.”

After that, another two girls came in at around 12.40pm and were assigned Room 3.

“I have come across some couples engaging in sex acts in our rooms before, so I’m usually more vigilant and will do spot checks every so often.”

When she peered into Room 5 via the glass panel on the door, Krist saw the woman, allegedly bent over in front of the sofa.

The woman's silhouette was illuminated by the dim white glow from the television screen despite the lights being turned off.

“I know she was wearing a skirt but I couldn’t see if she had it on. I was sure that she was wearing her shirt though. She was just facing the sofa, bent over 45 degrees.

“I could not see where the guy was at all.

“I immediately shouted at them and tried to push the door open. The guy rushed to the door and forced it shut after I shouted.

“He kept pleading with me to let his companion wear her clothes first.”

Krist ran back to the counter to grab her phone so she could take a video of the incident.

In a video taken by Krist, the woman is seen in the room with her back facing the phone’s camera.

The woman appears to be tidying up her shirt, and a man can be heard saying:

“(Shes’s) putting on her clothes now.”

Krist then tells the two:

“I can call the police.”

Both the woman and man continue to tidy up, before leaving the outlet hurriedly.

As they walked, Krist reminded them that there were surveillance cameras in the store.

“I wanted to reach into the crack of the door, but I was worried that the man would slam it shut and injure my fingers, so I took the video from outside the room instead.

"We need to teach this kind of people a lesson."