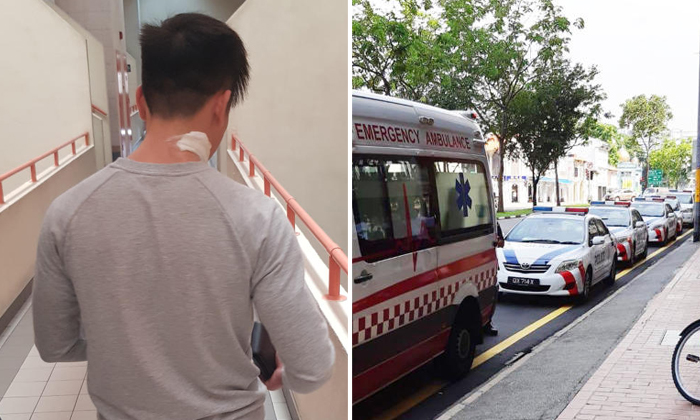 A 23-year-old man was arrested last Thursday (May 2) after allegedly slashing his own wrist and neck during a dispute with his ex-girlfriend, who is reportedly older than him.

According to Lianhe Wanbao, the incident occurred in a residential unit at the Textile Centre in Jalan Sultan, at around 9.35am.

The man, who was described as good-looking, had shown up at the foot of the building with a vegetable knife.

When his ex-girlfriend appeared, the two got into a dispute. They then entered the lift together and an argument ensued.

The couple continued quarrelling along the corridor when they reached the level where the woman lived, with things getting increasingly heated.

A source told Wanbao that the couple stopped arguing after sometime and looked like they had reconciled before returning to the woman's residence.

However, the pair soon got into a dispute again.

According to Wanbao, the man slashed his left wrist and neck with the knife in hopes of saving his relationship. His ex-girlfriend's neck was also injured in the incident.

The building's security personnel was alerted. They called police, who subsequently arrived and arrested the man.

A store employee at the building, Ms Li, told reporters that she saw at least five police cars and an ambulance at around 10.45am that day.

She added: "Not long later, I saw a young man in handcuffs being led into a police car. His wrist was bandaged and and his neck was also injured."

Ms Li said that she had seen the man at the building on a few occasions, and heard from people who knew the couple that they had broken up recently.

Responding to media queries, the police said they were alerted to a case of attempted suicide along 200 Jalan Sultan.

The man was conscious when taken to Singapore General Hospital and subsequently arrested in relation to the case.