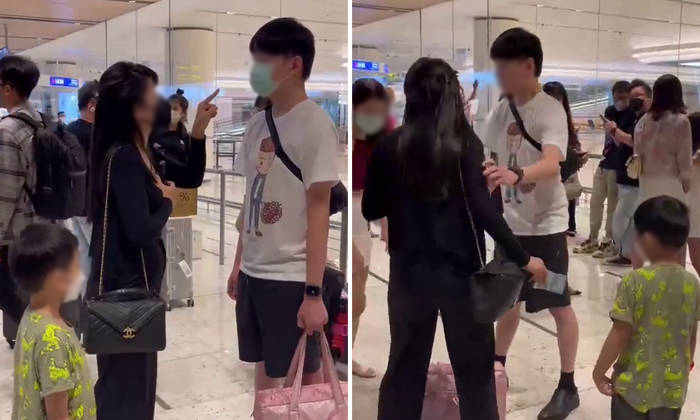 A woman was caught on camera giving her husband a tongue-lashing after ambushing him and his female companion at Changi Airport.

The woman posted a series of videos of her confronting her husband, whom she said has been "missing for the past six months" and neglecting his family.

She said her husband, who is a Singapore Permanent Resident (PR), came back to Singapore from Bangkok "walking hand in hand with the girl in couple shirt".

This can be seen in one of the video clips uploaded by the woman, who is accompanied by her toddler at the airport.

Another video shows her asking her husband, "Where are you? For the past six months? You say you can't find any job and you cannot go back to Malaysia?"

The woman is then heard saying: "Where is the (divorce) paper? Where is the paper? You think you are divorced with me already ah?" and "I saw you coming out with the girl, holding hands together. And your son saw it too!"

In another clip, the woman can be heard berating her husband for how he has been treating his own father. She says, "Your father has been begging for you to come home, but did you return? No!" and "Is he your father or my father?"

The next video shows the 'girl' in question trying to collect her pink bag from the man, only to be confronted by his wife.

According to the woman, her husband has not been in touch or contactable for the past half a year.

In her Facebook post, she identified herself as a full-time housewife who has had no income since her pregnancy and alleged that her husband has not given her a cent for living expenses.

In a subsequent update on Monday (June 20), the woman said she had "thought about it for a long time" before deciding to come to Singapore to look for her husband and even sought the police's help.

She wrote: "My child and I stood at the arrival gate and saw my husband holding hand in hand with his female student walking out wearing couple' clothes. At that moment, my heart hurt and broken. Somemore the girl student was still carrying my backpack."

The woman also shared further details about her marriage and appealed for help as her husband still refuses to get in touch.