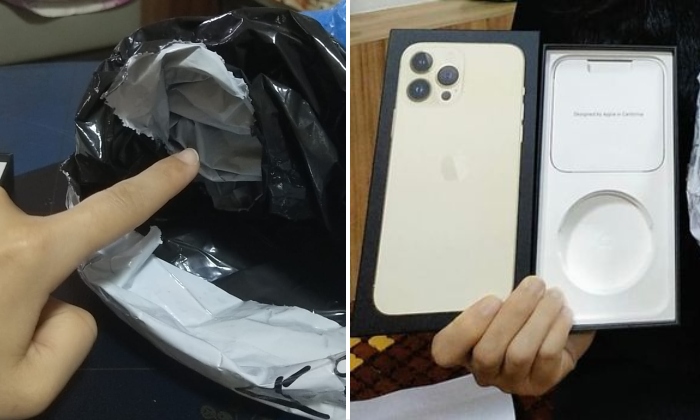 Having paid over $1,600 for an iPhone 13 Pro Max, a woman was shocked to find an empty box delivered to her flat instead.

The 30-year-old, who placed the order via Lazada on Sept 25 for $1,624.49, received the parcel that was supposed to contain her iPhone at her doorstep on Sept 27.

When she opened it, she found the phone and USB‑C to Lightning Cable accessory missing.

In her Facebook post, she shared images that showed the parcel had allegedly been tampered with and that the wrapping inside was torn.

The parcel appeared to have been rewrapped again, she wrote.

The woman's husband made a police report on the same day. The couple also made trips to SingPost and Lazada to lodge complaints, they told Mothership.

SingPost and Lazada informed them that they would look into the matter.

A Lazada representative personally delivered another iPhone 13 Pro Max to the couple’s home on Oct 3. The company also conveyed their apologies to them.

In the woman's Facebook post, she put up CCTV footage retrieved from her neighbour's camera, which showed the delivery personnel who dropped off the parcel at around 3:15pm on Sept 27.

The post was accompanied by an appeal calling on the delivery personnel to step forward and assist with investigations into the matter.

Related Stories
Not 1 but 2 buyers get used face masks in Lazada orders instead of their purchases
Stomper orders Nike shoes via Lazada but receives a pair of no-brand socks
Is this your iPhone? It was found in JB
More About:
lazada
iphone
online shopping
stolen