Law firm calls customer 'retarded' when she enquires about their services 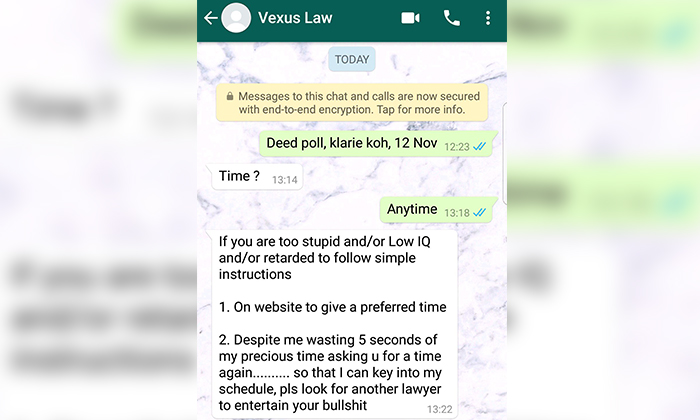 When you enquire about a service, the last thing you would expect is to be insulted.

However, that was exactly what happened to Shuwen Poh when she enquired a law firm about their services on Nov 5.

In a Facebook post that had since gone viral, Ms Poh messaged the law firm, Vexus Law, on WhatsApp to enquire about a deed poll for her daughter.

She was met with a scathing response that called her 'too stupid and/or low IQ and/or retarded to follow simple instructions' and to 'find another lawyer to entertain her bullsh*t'. These instructions that the law firm was referring to, was to state an appointment time which she had stated as 'anytime'.

Ms Poh explained in her post: "The appointment time I stated as 'anytime' because I am available to drop by anytime, and can fit the lawyer's schedule as he deem fit."

The firm in question, Vexus Law, prides itself on being a cost-efficient business that provides affordable legal services.

That being said, this is not the first time that the law firm has been in the spotlight for the wrong reasons.

In a viral Facebook post in 2015, Kathryn Teo shared a WhatsApp conversation between her and the law firm, where she was also enquiring about their deed poll services. The law firm responded, saying that "they don't have time to answer stupid questions."

He was seeking confirmation for the collection date of the deed poll when Vexus Law responded by telling him "to learn how to read instead of wasting lawyers' time answering stupid questions" and adding that he "must be a stupid China girl or Malaysian".

Stomp has tried to reach out to Vexus Law for a comment but we have yet to receive a response.

Related Stories
Woman rages at cashier in ION Orchard store as she's upset with service
Baker stands up to customer who took $0.50 cake topper from her shop and said, "Just give it to me la!"
Stickies Bar CEO who called customer 'bitch' after 1-star review responds to Stomp with video
More About:
rude
lawyer
customer service