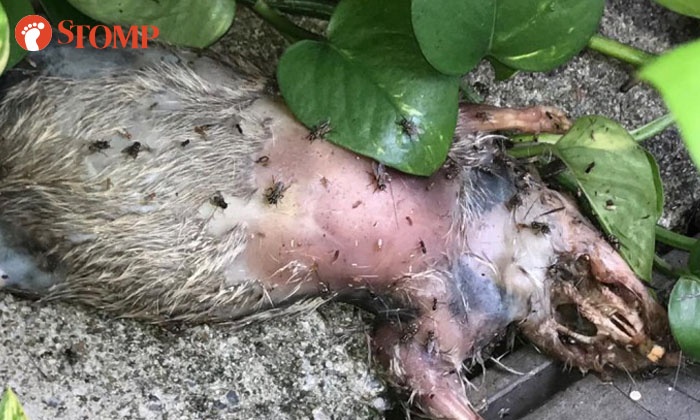 He snapped photos and a video of the incident and sent them to Stomp.

In the pictures, many flies can be seen on the carcass' body.

He was with his colleague in the area, when a strong stench caught his attention.

He said: "There was strong stench and I tried looking for the source.

"That's when I saw the biggest dead rat I have ever seen on the ground.

"Judging from its size, it must have lived to a ripe old age."

When Lau Lup saw the rat, he said he was shocked and did not know how to react.

"I saw many flies hovering around its body.

"It took me a while to come to my senses, which is when I saw a cleaner nearby."

Lau Lup alerted the cleaner of the dead rat.

He told Stomp that the cleaner did not look surprised or disgusted to see the rat.

"He looked nonchalant. Maybe to him seeing a dead rat was just part of a day's job," the Stomper added.

Lau Lup said that after the incident, his colleague, who was with him, shared a story about seeing a rat that was almost the size of a cat in a drain.