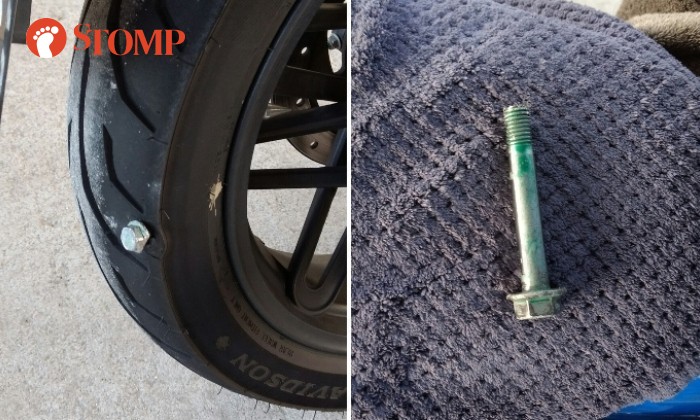 A man was excited to have smoother, faster rides on his motorcycle after he paid $650 for a new rear tyre in early Nov.

But his smooth ride was cut short when he heard a loud 'bang' and what he described to be 'clunking sounds' while travelling along the Tampines Expressway (TPE).

Turns out, he rode onto a screw and his new tyre was punctured.

The man, who wanted to be known as Stomper Arikamer, said the incident happened on Monday (Dec 7) at 7.45am. 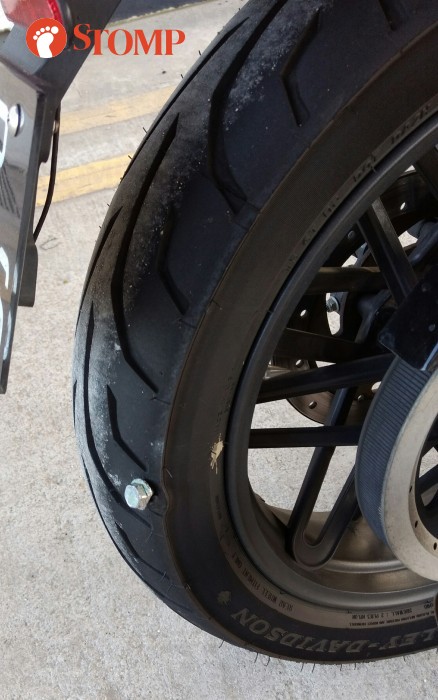 Photos that he sent show a large screw embedded in the rear tyre of Arikamer's motorcycle.

"I was riding happily along the TPE towards Changi just before the Lorong Halus exit when I suddenly heard a loud bang," Arikamer said.

"Then, there were continuous clunking sounds and the ride became bumpy.

"Thankfully, the tyre didn't burst and I was able to ride about 500m to the nearest bridge.

"I stopped at the side, just under the bridge and saw a huge screw in my rear tyre.

"I'm so unlucky! I just changed my rear tyre a month ago, and I paid $650 for that new tyre to make it fit perfectly with my Harley Davidson Sportster model."

Arikamer added that he quickly called a tow service, and had his motorcycle towed to a repair shop in Kaki Bukit.

"I was so angry at first because it's a lot of money. But I'm also relieved I wasn't injured.

"Just wanted to remind other motorcyclists to be careful while riding on the roads, especially on the expressways.

"There may be screws or other obstacles in your way, so please avoid them."