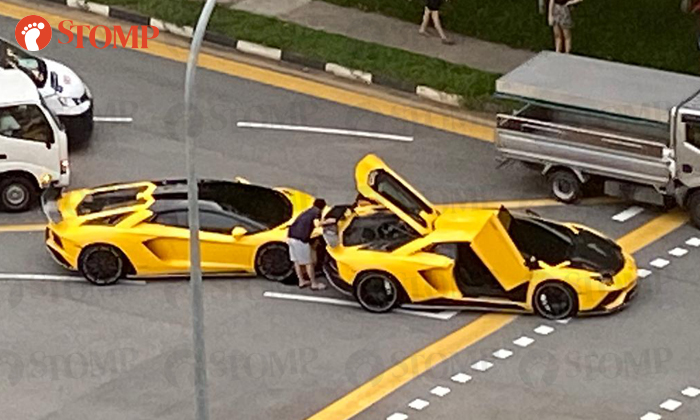 Two lookalike Lamborghinis were involved in a collision in Sembawang on Sunday (June 7).

Stomper Theventhran, who witnessed the accident, said it occurred at the junction of Sembawang Road and Canberra Street at around 6pm.

Stomp understands that the first Lamborghini had stopped at the traffic junction, but was rear-ended by its 'twin' which could not stop in time.

Theventhran, a resident in the vicinity, told Stomp that he was sitting in his balcony when he saw the crash.

He recounted: "The two Lambos were waiting to turn. Suddenly, the Lambo at the back went swerving forward and crashed into the Lambo in front.

"Within seconds, there was smoke coming from the engine bay, followed by a fire.

"I started to panic, thinking that it was gonna catch fire or cause an explosion. Fortunately, the fire died after awhile. However, there was a leak of engine oil."

Videos submitted by Theventhran and his wife, Thishalini, show the oil leak from one of the Lamborghinis while it was being towed away.

Photos of the incident have also been circulating on social media.

According to Theventhran, the scene was cleared at around 9pm.

He added: "It took nearly an hour to remove the oil from the road."