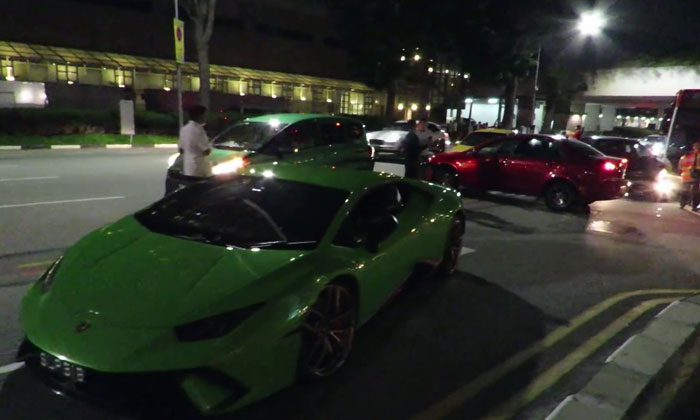 A Lamborghini was involved in an accident with other vehicles at Raffles Boulevard after 'speeding' out of Mandarin Oriental hotel's carpark earlier this month.

Stomper Allen alerted Stomp to a video of the incident that was posted on SG Road Vigilante's Facebook group page.

Footage in the video is taken from YouTube channel Jec'sphotos and shows the green Huracan Performante Lamborghini exiting the hotel's carpark and later accelearting along Raffles Boulevard.

The video later cuts to the scene of the accident involving the Lambo and at least two other vehicles.

According to Jec'sphotos, the incident happened after a Chinese New Year gathering of Lamborghini Club members.

The caption said: "Once it got dark, things started heating up and cars starting revving and shooting flames all over the carpark!

"While that was going on, a Huracan Performante crashed while exiting the place.

"Thankfully, everyone seemed okay and there were no serious injuries."