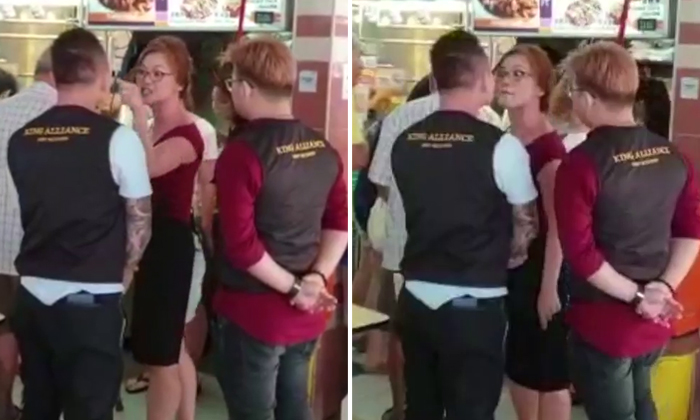 Videos showing a woman in a heated confrontation with debt collectors who turned up at her kway chap stall have gone viral.

In the first video posted on Dec 18, she can be seen telling two debt collectors in a raised voice not to obstruct the way for patrons and not to complain if her kway chap spilled on them.

However, the men did not budge.

This led the woman to repeatedly tell one guy "you wait and see" and "I try and let you see".

She then went right up into his face and gave him a death stare.

In a Jan 2 video which King Alliance Debt Recovery called a 'follow-up', the woman can be seen standing off against a group of men with the same level of feistiness.

According to Shin Min, Ms Tan had gotten to know a 64-year-old businessman in 2014 after he patronised her stall. Although both of them were married, they entered a relationship.

According to her, the businessman was understanding towards her plight and did not require her to sign an IOU or return the full sum.

However, their relationship soured after he found a new lover.

"At his new lover's request, he took me to court to recover his money," said Ms Tan, adding that she was left bankrupt as she could not repay the full sum immediately.

She also said that the businessman employed the debt recovery company, who would show up at her home and her stall to ask for money.

Ms Tan lamented: "I am already bankrupt but they refuse to let me off. Last week, the businessman's new lover found my daughter's phone number and texted her about everything. I have now fallen out with my four children.

"My money is gone, my family is gone, everything is gone!"

Responding to criticism by netizens, Ms Tan said she had been forced her into a desperate corner, which was why she decided to retaliate by publicising everything.