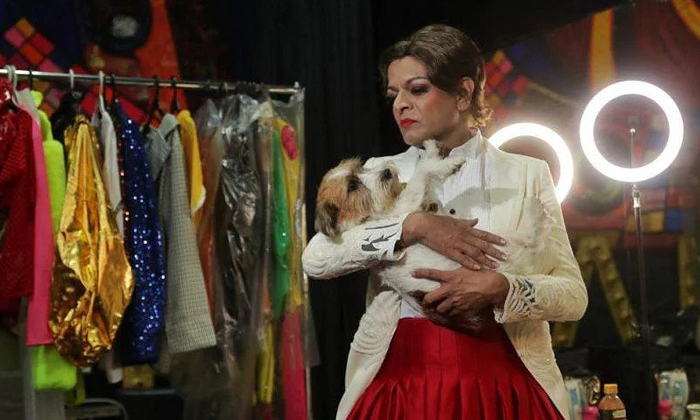 We are in Kumar’s dressing area. The Straits Times video team is fussing with equipment, as they do. The idea today is that I talk to the comedian about his 30 years in show business as he gets made up and dons a dress. To witness a transformation as he reflects on his legacy.

Kumar, 54, is sitting at his make-up mirror, face blank, not saying a word. I can’t tell if he is happy, sad or if he wants to murder us all. To break the silence, I make small talk.

You do TV work, you must be used to long set-ups, I say.

Loud enough for the crew to hear, he says: “Not really. They," and by “they”, he means us, "don’t have experience. They don’t know what they want or what to do."

The interview is off to a great start. I can tell.

The thing about Kumar is that he speaks only a little or too much. Not much in between. I ask him if the outfit he will wear for the photography session has a concept behind it.

"No. I don’t even know what I’m wearing today," he says. Okay, moving along.

More nervous laughter from me. Listening back to the recording, I note that my anxious cackling makes up much of it, usually coming after he drops a wild opinion about gender identity or race. He is not doing a theatrical bit or trying to be politically incorrect. It’s his world, and I am living in it.

Take his opinion on drag shows, for example. He’s been in frocks longer than many in his audience have been alive. Saris, sequinned bustiers, billowy gowns – you name it, he’s worn it. He was the main attraction at the now-defunct Boom Boom Room cabaret, starting in the early 1990’s. RuPaul’s Drag Race was years from being a gleam in a television producer’s eye. I asked him if he goes to live drag shows in Singapore.

The answer is no.

"Nowadays, they do drag, but I don’t know for what," says the man who cross-dressed in Singapore when it was dangerous. ("They called us 'ah quah', 'bapok', words like that.")

The lip-syncing at drag shows doesn’t excite him, he says, and the songs just don’t cut it, not like they used to when real divas – Madonna, Diana Ross and Janet Jackson – ruled the world. At Boom Boom, Kumar could conjure up, say, Cyndi Lauper with a wig, clothes and a pose.

"Now, they all look alike. Taylor Swift, Billie Eilish – they don’t have an identity. How do you impersonate Taylor Swift?” he asks.

He also wants to set the record straight, so to speak, about his cross-dressing. It’s important to him that he is known as a comedian first.

"I am not a drag queen. I am a stand-up comedian who dresses in drag. I am not trying to do RuPaul," he says.

"Being a comedian is what I do. I put a smile on people’s faces," he adds.

He puts on a dress to "become a different person”. It lets him escape his personality, to become his alter ego, the Kumar who can roast guests in the front rows, scold latecomers, mock the ones in the expensive seats. And compare, by race, the size of male parts.

As for pronouns, the man who favours an androgynous look in daily life says he’s happy staying with "he" and "him". And that is all he will say.

Fans will know he has a joke about pronouns, in which he doubles down on not wanting to be a more ambiguous "they/them". It works off how "they" sounds like the Tamil "dei", meaning "dude" or "bro" and it's an example of his humour – observational, local but also a bit curmudgeonly.

His old-fashioned streak comes out when he talks in a didactic way about entitled kids ("It is a privilege to be born into this world"), being good to one's parents and grandparents ("They are not furniture"), doing what makes you happy ("If you want an ice cream, eat one, everyone’s worried about weight") and, of all things, transport infrastructure ("Before Covid-19, everyone wanted a car, now they see there’s no need because the public transport is good").

Keep in mind that while he says all this, a make-up artist is preparing to glue on lashes and he is minutes away from putting on a skirt. He'd be your average heartland uncle, who just happens to have a killer collection of stiletto heels.

In between theatre shows, he has stints in a couple of local clubs and – this is a surprise to me – he does corporate dinners. A job is a job, he says, but he avoids industries that seem to attract homophobes, people who think it is hilarious to scream slurs at him from the back of the room. It still happens, he says.

As long as there is no abuse, he puts on a full show, no matter how distracted or drunk the corporate crowd is. Inside, though, he's fuming and wants to hurl an f-bomb at the audience, he says. But he has never said it.

Related Stories
Kumar gets dirty and flirty to mark 30 years in showbiz: Win tickets to his new show
More About:
entertainment
contest