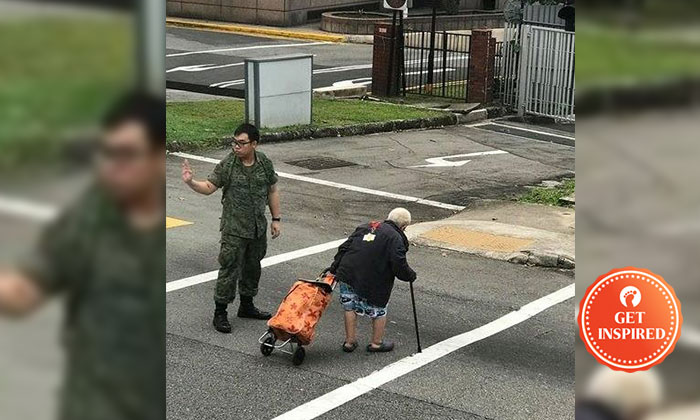 A soldier from the Singapore Armed Forces (SAF) was spotted helping to direct traffic so that an elderly woman could cross the road.

A photo of the incident has been circulating on various Facebook pages, including All Singapore Stuff and ROADS.sg.

In the photo, an elderly woman, hunched over, is seen dragging a trolley as she hobbles across the road.

A SAF soldier in his No. 4 uniform stands beside her, with his arm raised, seemingly to warn approaching traffic about the woman.

The act of kindness has many netizens full of praises.

“What a kind young man.”

However, some criticised that the soldier could have done more. A netizen commented:

“Why did that hero boy use his hand to help carry her luggage and cross the road? I believe any driver who sees his action should be able to know what is going on there and will surely stop and make way for the both of them.”

“You belong to that special breed of Singaporeans who can't say "good job" and instead criticise everything.”