Kudos to SBS employee who remembered sleeping passenger's destination, woke him up at MRT stop 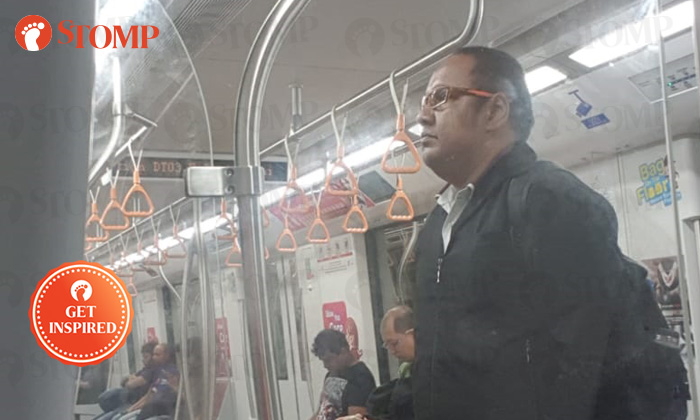 A thoughtful staff member who woke a sleeping passenger up in time to alight caught a Stomper's eye as he was taking the Downtown MRT line to work at about 9am this morning (Aug 2).

The Stomper, who takes this line every day, has noticed this staff member a couple times.

He said: "The guy looks fierce when he walks through the carriages because he doesn't smile, but when he interacts with a passenger, he becomes a totally different person.

"He looked so warm and friendly and has a good smile when he approached the male passenger to wake him up at MacPherson station.

"The passenger looked shocked, and a little blur, but thanked him before leaving."

"Quite a while back, I saw him waking a girl when the train was arriving at Bukit Panjang station.

"He has a different way of waking people up depending on their gender. If it's a guy, he taps the shoulder. But for the girl, he knocked on the glass panel to wake her up.

"I was amazed by how he could remember where his passengers will be alighting."

Piqued by curiosity, the Stomper approached the employee.

"I asked him why wake the passenger at that specific station, and he said he recognised the passenger who usually alights at MacPherson.

"He told me that he wanted his passengers to have a good journey home or to work, and do not want them to miss their stop and be late for work.

"He said he understands how troublesome it is to miss a stop because he's experienced it as well.

"I would really like to say kudos to this employee's initiative in going the extra mile to recognise his passengers, although I didn't catch his name."

The Stomper also praised the other staff members for their efficiency.

"When taking the Downtown line, I notice that there will always be staff on the train, which makes it easier for them to help if there is an emergency.

"They also have a fast reaction. One time, they found a lost item and immediately reported it to the staff back at the station with their walkie-talkies."