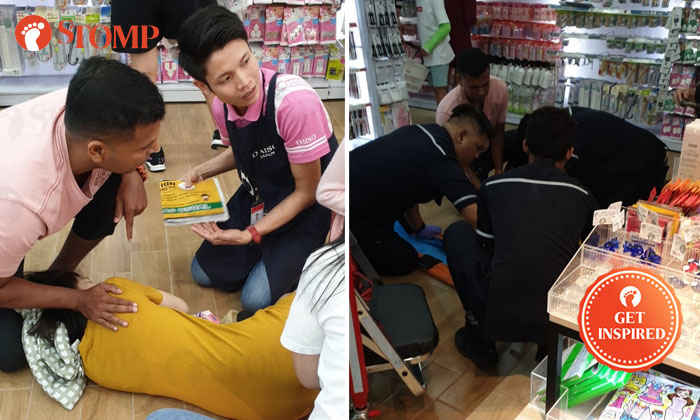 A woman was taken to hospital after collapsing at Daiso in Tampines 1 on Sunday afternoon (Feb 24).

A Stomper, who saw what happened, told Stomp how a passer-by and the store's staff rushed to help the woman.

"The woman collapsed and looked like she was going through a seizure," said the Stomper.

"She vomited and her eyes rolled upwards.

"Everyone was shocked and didn't know what to do, including me.

"Thankfully, a passer-by came forward and called 995 before turning the woman onto her side.

"He then asked the Daiso staff to bring cushions and blankets to support her head and to cover her up.

"He continued to talk to the woman and tried to calm her young daughter who was visibly shaken."

The Stomper said when the woman's husband arrived, the passer-by told him he was a fireman and that his wife would be all right.

Paramedics arrived soon after and took the woman away in an ambulance.

"If not for this passer-by, I don't know what would happen to the woman.

"She was indeed lucky."

In response to a Stomp media query, the Singapore Civil Defence Force (SCDF) said it responded to a call for assistance at 10 Tampines Central 1 at about 4.20pm.

A person was taken to Changi General Hospital by an SCDF ambulance, a spokesman said.