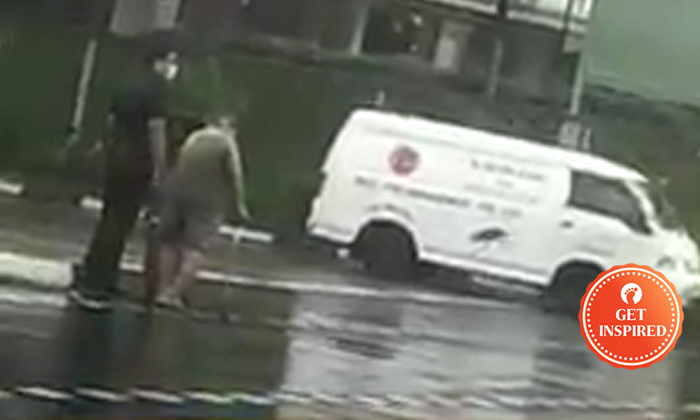 An ambulance crew member from the Singapore Civil Defence Force (SCDF) warmed hearts on a rainy day when he was seen helping an elderly man cross a road in Yishun.

The ambulance crew had been returning to Yishun Fire Station after responding to an earlier emergency call when they spotted the man in need, the SCDF told Stomp.

Facebook user Mohd Sharfu posted a video of the incident and said it occurred at the junction of Yishun Avenue 2 and Yishun Avenue 5 on Thursday (Oct 11), at around 3pm.

In the video, the elderly man can be seen struggling to cross the wet road amidst oncoming traffic when the SCDF staff member went to his aid.

Sharfu wrote in his post: "Proud of this SCDF staff who stopped his ambulance along the road side and helped this elderly person with walking difficulties."

He also clarified that the video, which Stomper Sufian alerted Stomp to, was filmed by a friend who was a passenger in his vehicle.

In response to a Stomp query, an SCDF spokesman said: "The SCDF ambulance crew was returning to Yishun Fire Station after responding to an earlier emergency call when they noticed an elderly man who had difficulty crossing the busy road.

"One of the crew members alighted to ensure the man’s safety while crossing."

Many netizens praised the SCDF officer for a job well done: