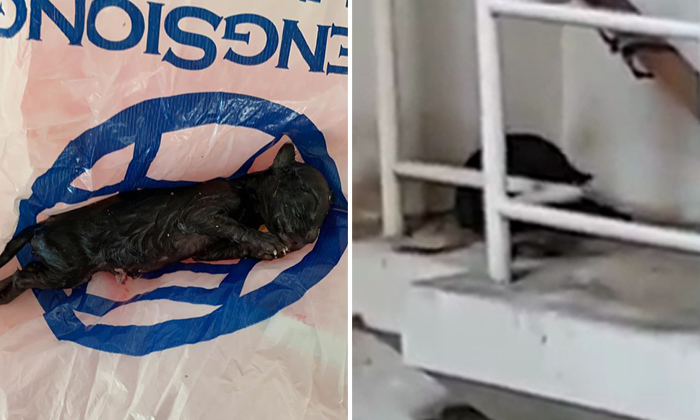 Update on June 1: AVS investigating death of kitten that allegedly fell from parapet at Woodlands block

A kitten was found dead at the foot of Block 782B Woodlands Crescent on Sunday (May 24).

The feline had apparently fallen to its death from an air-conditioner ledge at the block.

Stomper Nur alerted Stomp to photos of the incident posted by the 'Rescued cats for adoption' Facebook page, an animal rescue community that aims to rehome cats.

Nur, also an animal rescuer who is acquainted with the rescue team, said: "An irresponsible owner's pregnant cat gave birth on the air-con ledge.

"One of the kittens stumbled to locate the mum cat but fell to the ground instead. It was instant death."

According to Nur, rescuers and the authorities from various agencies had knocked on the cat owner's door but to no avail.

Dr Jaipal Singh Gill, executive director of the Society for the Prevention of Cruelty to Animals (SPCA), told Stomp: "The case has been reported to us and we thank the public for being vigilant and raising the alarm.

"It is always concerning to see pet cats allowed to roam outside of their homes and the animals gaining access to ledges of apartment blocks.

"We have seen countless cases of cats falling to their deaths, or sustaining very serious injuries from falls that could have been easily prevented."

Dr Gill said that the risks are "going to be much higher" for a cat in labour.

He added: "In the present case, investigations are ongoing."

Related Stories
Owner appealing for witnesses after cat allegedly killed in hit-and-run at Commonwealth Crescent
AVS looking into case of cat that was allegedly beaten to death and hanged from pipe at Bedok Reservoir
Tail of community cat in Ang Mo Kio allegedly cut off, SPCA investigating
More About:
animals
cat
dead
death