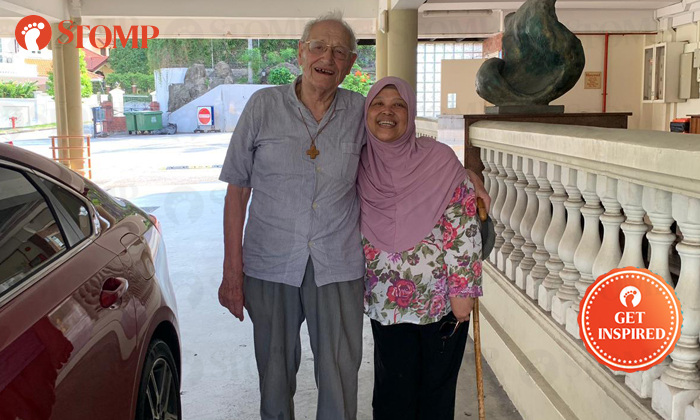 Stomper Lamont shared a story with Stomp about her colleague who was driving along the East Coast Parkway when she came across an old man who was lost.

Stomp reached out to Lamont's colleague, Shima, who said that she saw the man with a walking stick along a road shoulder after Bedok.

She winded her windows down and called out to him, to which he responded: "Yes, I'm lost! I've been walking for two hours."

In a video Lamont shared with Stomp, Shima is conversing with the man, 88-year-old Mr Bernard, a pastor from France.

Shima said she found out that Mr Bernard was going to Church of Our Lady of Perpetual Succour in Siglap and offered to drive him there.

She told Stomp: "My husband was brought up in Siglap, so he knows the church. My husband asked Mr Bernard if that was correct and the pastor said yes!"

He told Shima he was in Singapore for a holiday but was previously here from 1960 to 1970 where he trained bishops, archbishops and cardinals.

When they arrived, Shima bade Mr Bernard a farewell, telling him to "take care".

In an interview with Stomp, Shima said: "The pastor was so happy and grateful.

"My husband said I must take a photo with the pastor, and Mr Bernard even asked if he could give me a kiss!

"It's a blessing for me to help since he lost his way. If I can help, I'll help!"

Lamont said to Stomp: "Shima did a very good deed, especially since it's linked to our job as customer service personnel. It's an act of humanity and we should all learn from her."