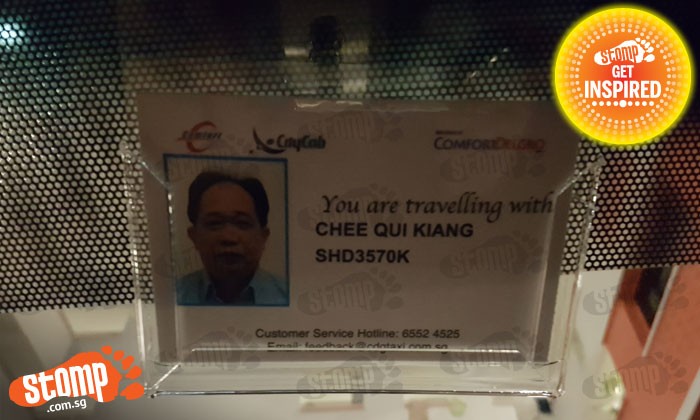 Stomper Xuan Ning was being sent home by her boyfriend on Sunday (Sep 18) night at around 10pm, when he burst a tyre.

Not having the correct tools to fix the tyre on their own, the couple were stranded along the road next to Choa Chu Kang Community Centre, flagging oncoming vehicles hysterically and hoping for help.

After a good 45 minutes, an uncle stopped his car to help the couple, only to realise that he too didn’t have the correct tools to fix the car. Despite that, the uncle tried whatever he could to help but to no avail and thus left.

A while later, they managed to flag down Mr Chee’s comfort cab SHD3507K who offered to help the couple.

"He took his taxi's tools to help us.

"After my boyfriend left, I went back home to grab cold drinks to pass the taxi uncle as a token of appreciation."

Mr Chee spent close to an hour fixing the tyre, and the couple are truly grateful for all his help.

"I am aware that with every minute he spent to help us, he is losing his 'salary' and chance to fetch new customers.

"We are so thankful for his help!" says Xuan Ning.