Kind soul helps old man who peed on himself cross the street, buys him underwear and wet wipes 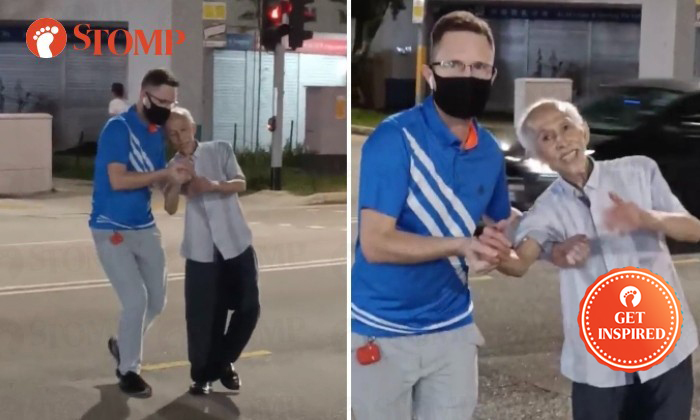 When Stomper Gavin saw someone in need of help, he immediately sprang into action and lent a helping hand.

Gavin, who came to Singapore from Scotland in January this year, went above and beyond to help an elderly man who had peed on himself and was having trouble crossing the road at 56 Lorong 25A Geylang.

Gavin said the incident that happened on Monday (Sep 28) at 3am and sent a link to a video posted on Facebook by a passer-by who was also at the scene.

In the video, Gavin can be seen guiding the old man across the street.

Towards the end of the video, the old man gives a heartening, grateful smile and waves to show his appreciation.

"I was drinking a honey lemon drink at a coffee shop called 25 Food Loft when I noticed an old man across the street," Gavin said.

"I could sense that something was wrong as the old man was walking slowly and kept stumbling over to one side.

"I had to act immediately because I was afraid that he was going to fall onto the concrete road.

"When I went to him, I noticed that he had peed on himself and was leaning heavily to one side.

"We took small steps and I guided him across the road where there was a place to sit down.

"However, when we got to the coffee shop, he was reluctant to sit down on the chair as his pants were wet.

"So I decided to go the extra mile and headed to 7-Eleven to buy disposable underwear and some wet wipes for him.

"I told the other men at the table to assist him to the toilet and help him get cleaned up.

"The old man seemed quite scared. He was speaking in Mandarin to the other men and pointing to his trousers that were all wet.

"I thought about getting him a spare pair of trousers but my condominium was too far away for that.

"I am not sure what happened after that but I hope he gets some help and goes for a medical checkup.

"I would like to meet him again, make sure he is okay and take him for some tea.

"My mother, who is back home in Scotland, has always taught me to respect the elderly and show love to them as they are very important.

"After all, we will all get old one day.

"If anything I hope this encourages people to do at least one good deed a day."