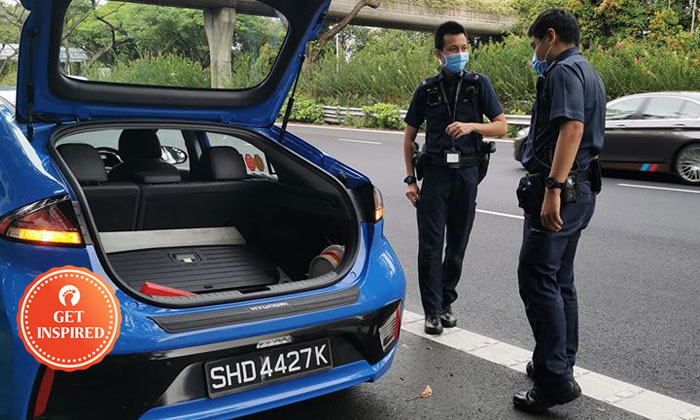 A couple of police officers went out of their way to help a family after the taxi they were riding in broke down along Nicoll Highway on June 20.

Facebook user Darin Ira shared how grateful she was to the officers in a post on June 21.

She told Stomp that she, her husband and three-year-old daughter were in a taxi on the way to Changi to view their new house when the cab's tyre blew out on Nicoll Highway at about 5pm.

"We were on Nicoll Highway for about five to 10 minutes when I heard a sound come from the taxi," she said.

"I asked the driver to pull over and we discovered the right rear tyre had blown out.

"The cabby tried to change the tyre while I tried to hire a new taxi but couldn't find one.

"After around 10 minutes, a police car stopped and the officers asked us what had happened.

"One of the policemen said it was dangerous on the highway and it wasn't safe, especially as we had a small child with us.

"They said they were passing that way and offered to send us to our destination."

Darin told Stomp she paid the cabby the fare for the journey so far before getting into the police car with her family.

"We thought it wasn't a good day for us but the police said the bad day is already over," she said.

"We were lucky that we met them there and nobody got harmed.

"We appreciate their gesture so much and just want to say thank you again to the policemen."